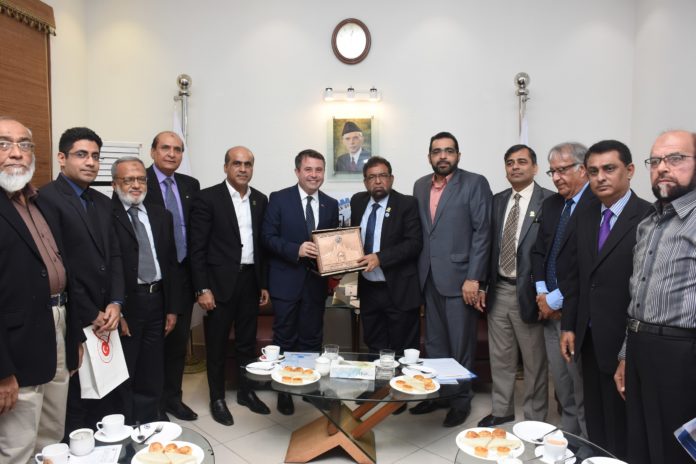 KARACHI: Keeping in mind that the trade volume between Turkey and Pakistan is limited to only $700 million, it is imperative that both countries ‘do more’ by increasing interaction and encouraging joint ventures.

While exchanging views in a meeting during his visit to Karachi Chamber of Commerce and Industry (KCCI), Consul General of Turkey Tolga Ucak said any initiative by KCCI to enhance its linkages with the Istanbul Chamber of Commerce would certainly be fully facilitated and supported by the Turkish Consulate in Karachi, as it would certainly prove beneficial for the business communities of the two countries.

Terming Karachi as a ‘vibrant and active city’ where a lot of production was taking place and numerous services were being offered, the Turkish CG advised the business community of Karachi to have more interaction with their counterparts in Turkey with a view to improve the existing trade volume, besides taking steps to promote tourism opportunities in both countries.

The envoy suggested that the KCCI should send a business delegation to Turkey to further explore trade and investment opportunities.

He said that business-to-business and people-to-people contacts have to be promoted between the two countries whereas the exchange of students must also be encouraged. “Turkish students, who usually go to western countries to learn English, can visit Pakistan study good English at some of the finest colleges and universities in the country,” he added.

Tolga Ucak informed that new office for Turkish Consulate in Karachi was being established on an area of 8,000sq yards near the Chinese Consulate where more facilities would be provided along with induction of additional staff to facilitate the visitors and visa applicants.

Earlier, KCCI President Junaid Esmail Makda, in his welcome remarks, briefed the Turkish CG about KCCI which is the premier and largest trade body of the country with a strong membership base of more than 55,000 direct and indirect members while around 500,000 plus taxpayers also fall under KCCI’s ambit through its member firms.

He said that the Karachi chamber, which remains actively engaged in raising voice for resolving the issues being faced by the business and industrial community, also acts as a bridge between foreign missions, government, law enforcement agencies, SMEs, small traders and industrialists of Karachi.

Referring to President Dr Arif Alvi’s recent visit to Turkey, the KCCI president said that Pakistan and Turkey have been enjoying excellent ties at the government-to-government level but unfortunately the same was not depicting at the lower level as the bonds between the business communities of the two countries were not satisfactory which requires collective efforts from both sides.