KARACHI: Bearish sentiments surrounded the bourse once again as trading resumed in the absence of a positive trigger after a holiday on Tuesday. Indices continued to wobble, and investors preferred to stay at bay. Consequently, volumes remained low.

The overall trading volumes improved slightly from the previous session and were recorded at 88.57 million with 61.08 million coming from KSE 100 index scripts. K-Electric Limited (KEL +0.17pc) was in the lead with a volume of 12.72 million, followed by Aisha Steel Mills Limited (ASL +3.49pc) with 4.46 million traded shares. Next in line was Sui Northern Gas Pipe Line Limited (SNGPL +2.52pc) with 4.16 million shares exchanging hands.

According to news reports, the government has transferred a sum of Rs25.7 billion into the accounts of Sui Northern Gas Pipe Line Limited (SNGPL) and Sui Southern Gas Company Limited (SSGC +1.06pc) to pay for the promised subsidy in gas in order to equalise the prices across the country. 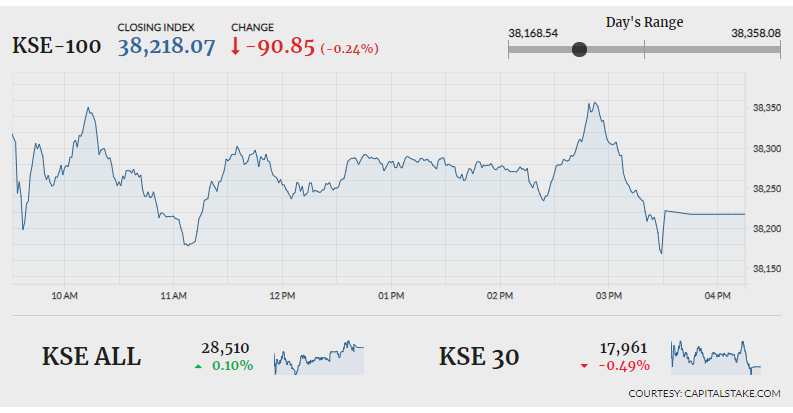 Shahmurad Sugar (SHSML -0.45pc) declared its financial results for Financial Year 2017-18 (FY18). The company announced a final cash dividend of Rs7.00 per share. Sales appreciated by 43%pcYoY, while earnings per share also improved from Rs0.34 in the same period last year to Rs 2.47 in the current year.

Habib Sugar Mills Limited (HABSM +2.38pc) released its financial performance for the year ending 30th September 2018. A final cash dividend of Rs2.75 per share was declared along with the financials. Sales were up by 9pc YoY while earning per share surged up by 62pc YoY (FY17 Rs3.72, FY18 Rs6.01).