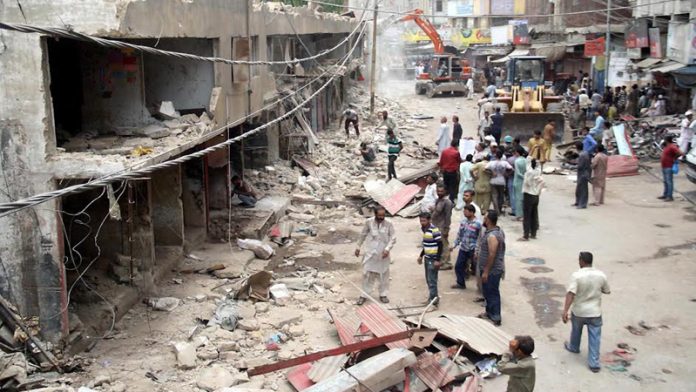 KARACHI: Karachi Chamber of Commerce and Industry (KCCI) President Junaid Esmail Makda and Businessmen Group Chairman and former KCCI president Siraj Kassam Teli have appealed Chief Justice Saqib Nisar to thoroughly interpret the Supreme Court’s order with regard to removal of encroachments from Karachi, as it is a general impression that the said order has been grossly misinterpreted and was widely being misused by Karachi Municipal Corporation.

In a statement issued on Tuesday, Siraj Teli and Junaid Makda categorically stated that the KCCI would never speak in favor of any encroacher and would always oppose them but the ongoing anti-encroachment drive was not purely targeting the encroachments, as most of the actions were being taken against genuine and legal shopkeepers who had these shops in possession for many decades and were regularly paying rentals to KMC under lease agreements.

They said that although the Supreme Court ordered KMC to remove all encroachments over nullahs, footpaths and inside the parks but unfortunately, it has been observed that the KMC authorities were not adhering to the court’s order and have resorted to razing all KMC markets and shops without any fairness and transparency.

It was said that all the wrongdoings under anti-encroachment drive by KMC have to be immediately stopped with a view to saving thousands of shopkeepers from getting deprived of their daily bread and butter.

“As the anti-encroachment drive has resulted in making a huge number of people completely jobless, we fear that the situation was likely to give birth to criminals, posing a severe threat to the law and order situation of Karachi where peace has finally started prevailing,” they said.

Referring to KCCI’s statement issued on November 28, 2017, on this particular issue, they reiterated that all political parties and bureaucrats, who remained in Sindh government from time to time during the past 25 to 30 years and all relevant departments were equally responsible for the encroachment issue.

“They all are responsible and now they just want to wipe out everything under SC’s order to save their necks and hide their wrongdoings,” they added.