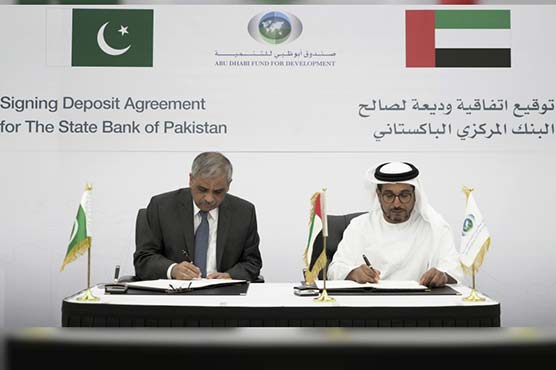 Pakistan and the United Arab Emirates signed a US$3 billion financial support package on Tuesday, as pledged by Abu Dhabi, to boost the liquidity and foreign exchange reserves of the cash-starved country.

According to the package, signed in a ceremony scheduled at Abu Dhabi, the UAE will deposit $3 billion in the State Bank of Pakistan to support the country’s financial and monetary policy.

The amount will be paid to Pakistan in three installments.

The UAE had announced its intention to inject $3 billion cash into Pakistan via the Abu Dhabi Fund for Development (ADFD) in December last year, a month after Prime Minister Imran Khan undertook his second trip to the country since assuming office.

Speaking on the occasion, Mohammed Saif Al Suwaidi said, “The directive to deposit $3 billion with the SBP aligns with the UAE leadership’s keenness to bolster Pakistan’s economy, help its government achieve financial stability and overcome economic challenges, and drive comprehensive development in the country. ADFD and the Pakistani government have enjoyed strong and long-standing ties dating back to 1981. The fund’s efforts have significantly contributed to improving socio-economic conditions in the country, boosting strategic growth and achieving the development priorities of the Pakistani government.”

For his part, Tariq Bajwa praised the UAE leadership for their continued support to the people of Pakistan. He also noted the support from ADFD over the years has stimulated economic growth and contributed to sustainable development.

Among notable projects, ADFD funded the AED227 million grant for the construction of the UAE-Pakistani Friendship Road. Linking the southern and northern parts of the Waziristan region, the 72km road facilitates the movement of people and goods between three major cities and 20 villages.

In 2013, the fund allocated AED217 million for the construction of the Emirates Hospital – a 1,000-bed integrated specialty medical centre. Catering to Pakistani military personnel and their families, as well as civilians with critical conditions, the facility has the capacity to receive 6,000 patients daily. The hospital features administrative and service departments, emergency care units, outpatient clinics, laboratories, and lecture halls to train military personnel and civilians in performing medical duties.

Furthermore, ADFD also allocated AED13 million to fit out the Sheikh Zayed Hospital in Lahore with modern equipment in compliance with best international standards in 2006.

In line with the Pakistani government’s development goals, ADFD has played a crucial role in enhancing the country’s education sector. In 2013, the fund financed AED46 million training colleges. The project involved the construction of three training colleges in remote areas – Warsak College in Khyber Pakhtunkhwa, as well as Wana College and Cadet College Spinkai, both in South Waziristan.

In addition, ADFD earmarked AED14 million to fund expansion works at the Sheikh Zayed International Academy, SZIA, in Islamabad in 2009.