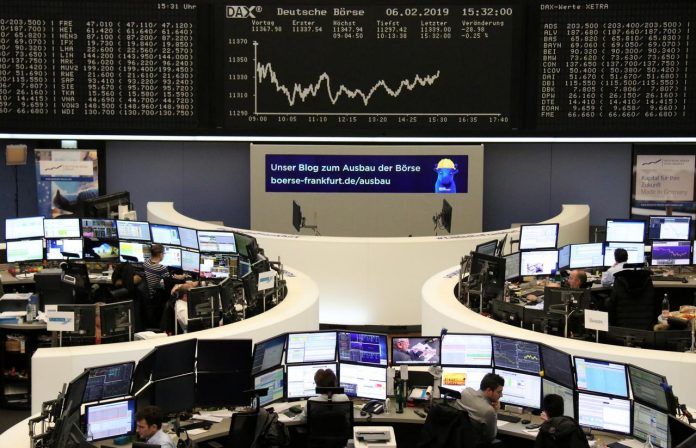 LONDON: World shares ground to a halt on Thursday as the dollar scored its longest winning streak since a hot run in early October that helped set off a wave of global ‘bear’ markets.

Some poor earnings and weak data out of Germany ensured Europe’s main bourses started lower and kept MSCI’s main index of world stocks heading for only its second two-day run of falls of the year so far.

The extent of the current slowdown in the global economy was highlighted as India unexpectedly cut its interest rates and the euro got hit to $1.1346 by Germany’s fourth consecutive drop industrial output.

That only compounded the 1.3pc the euro has lost over the last week and the tailwind behind the dollar, which has risen every day since Friday’s strong US jobs data. It has also recovered almost all the losses suffered after the Federal Reserve all but abandoned plans for more rate hikes last month.

Elsewhere the pound was struggling near $1.29 again ahead of a Bank of England meeting, while gloomy jobs data saw New Zealand’s dollar suffer a similar flop as its Australian counterpart had seen the previous day.

The kiwi slid to $0.6744, losing nearly 2pc in the past 24 hours, as investors wagered on the risk of a cut in interest rates there. The country’s central bank holds its first meeting of the year next week.

Asian trading was still light overall though with China on holiday and no major economic data on the diary.

MSCI’s broadest index of Asia-Pacific shares outside Japan added 0.1 percent as it rose to its highest since early October.

The index has risen steadily since early January as the US Federal Reserve changed its tune and emerging markets have surged more broadly after a torrid 2018.

Japan’s Nikkei slipped 0.6pc though and the caution quickly spread to Europe.

London’s FTSE was the only major bourse clinging to positive territory whereas the rest were down at least 0.2pc as were E-Mini futures for the S&P 500 and Dow.

One of the day’s big surprises came from India where its central bank unexpectedly lowered interest rates to 6.25pc to boost a slowing economy after a sharp slide in the inflation rate.

Italy’s bonds were back under pressure with the European Commission slashing its 2019 growth forecast.

Italy agreed a deficit target of 2.04pc in December, averting a major fall-out with the EU, though this was based on a growth assumption of 1.0pc. Slowing growth in Italy could make it harder for the country to remain within EU rules.

However, Benjamin Schroeder, rates strategist at ING, said he did not expect the EU to demand more fiscal tightening from Italy, should its forecasts be reduced.

“The EU has another thing to deal with — Brexit — and the other thing is do you want to infuse the campaign ahead of the parliamentary elections with this topic.”

The next major trigger for markets will more likely be any breakthrough in the US-Sino tariff talks when the two sides meet in Beijing next week.

US President Donald Trump offered little new to chew on in his State of the Union speech but Treasury Secretary Steven Mnuchin said on Wednesday he and other US officials will aim to clinch a deal next week to avert a March 2 increase in US tariffs on Chinese goods.

Probably more pressing though for the US markets is the threat of another government shutdown, Nick Twidale, an analyst at Rakuten Securities Australia said.

“With both sides of the house standing firm on the contentious border wall issue at present and the deadline approaching swiftly on Feb 15 we could be back where we were just a few weeks ago.”

Oil prices eased too after U.S. crude inventories rose and as production levels in the country held at record levels.