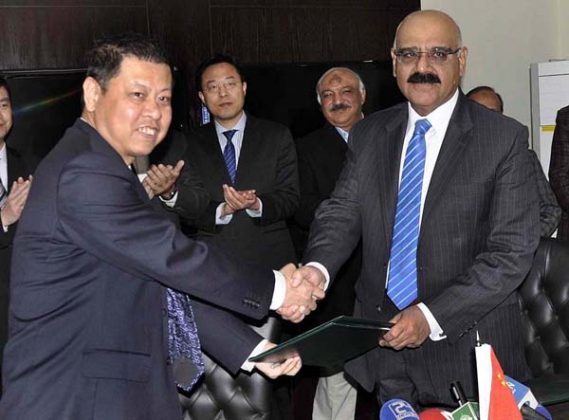 The minister was speaking at a signing ceremony held at the Power Division where the documents were signed by Private Power and Infrastructure Board (PPIB) Managing Director Shah Jahan Mirza and Pak Matiari—Lahore Transmission Company (Private) Limited Chief Executive Officer Wang Bo. Senior officers from PPIB and the Power Division were also present on the occasion.

The minister hoped this project would further pave the way for the private sector to implement future projects pertaining to transmission lines.

The officials briefed that this HVDC transmission line project is being developed under the framework of China-Pakistan Economic Corridor (CPEC) and is another achievement that has surfaced as a result of the untiring efforts of PPIB, Power Division, National Transmission and Despatch Company (NTDC) and other stakeholders.

China Electric Power Equipment and Technology (CET), which is a subsidiary of the State Grid of Corporation of China (SGCC), is the main sponsor of the project, responsible for executing the project through the formation of a special purpose company, i.e. Pak Matiari-Lahore Transmission Company (Pvt) Ltd.

Spread over 878km, the capacity of this transmission line would be 4,000MW at 660KV voltage, the officials briefed.

The project is designed to have bi-pole HVDC technology, having two converter stations, one each at the end of Matiari (Interior Sindh) and Lahore, three repeater stations and two grounding electrode stations.

PPIB issued a Letter of Support (LoS) for the project to PMLTC on August 4, 2017, and National Electric Power Regulatory Authority (NEPRA) granted a Special Purpose Transmission Licence to PMLTC for the Project on February 18, 2018.

The project entails an investment of $1.658 billion. After fulfilling mandatory prerequisites and completion of all financing arrangements, the project has successfully achieved financial close.

The project, which is scheduled to achieve commercial operations by March 2021, would be executed on build-own-operate-transfer (BOOT) basis and will be transferred to NTDC after a term of 25 years.

With the medium and long terms plans of power induction into the national grid, it is important that the power transmission infrastructure is made available to transport the electricity from the power generation facilities to the load centers.

PPIB is playing a vital role in private sector resources mobilization for large power generation and transmission infrastructure projects, and Matiari-Lahore HVDC transmission project is one such example.

In addition to this HVDC project, PPIB is currently facilitating the implementation of power projects having a cumulative capacity of 10,934MW under CPEC, including various hydel and coal-based projects.