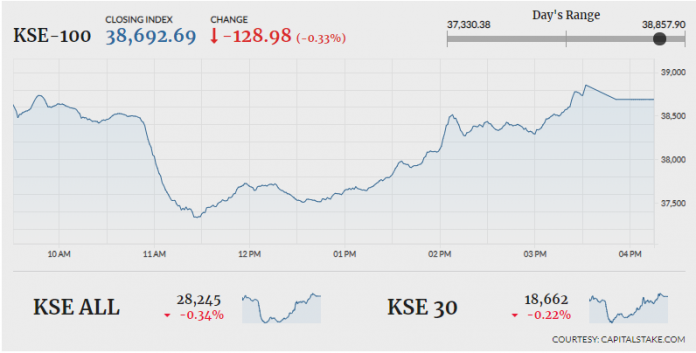 KARACHI: Trade floors turned red on Wednesday as tensions between India and Pakistan escalated, causing the index to lose over 1,500 points in intraday trading. Investors continued to offload since the beginning of the session.

Standard Chartered Bank (Pakistan) Limited (SCBPL -0.12pc) declared its financial performance for FY18. The company also announced a final cash dividend of Rs1.5 in addition to an interim dividend of Rs0.75 already paid. The company’s revenue increased by 16pc YoY, while its earnings per share appreciated from Rs2.13 last year to Rs2.90 in the current year.

Akzo Nobel Pakistan Limited (AKZO -3.42pc) released its financial results for FY18. An interim dividend of Rs5 was also declared by the company. Sales increased by 2.5pc YoY, whereas earnings per share declined from Rs12.34 in the preceding year to Rs8.34 in the current year.

Nishat Chunian Power Limited (NCPL +3.70pc) announced its results for the second quarter of FY19. The company also announced interim dividend of Rs1.00 along with its performance. Sales declined by 12pc YoY, whereas earnings per share improved from Rs2.312 in the same period last year to Rs2.605.