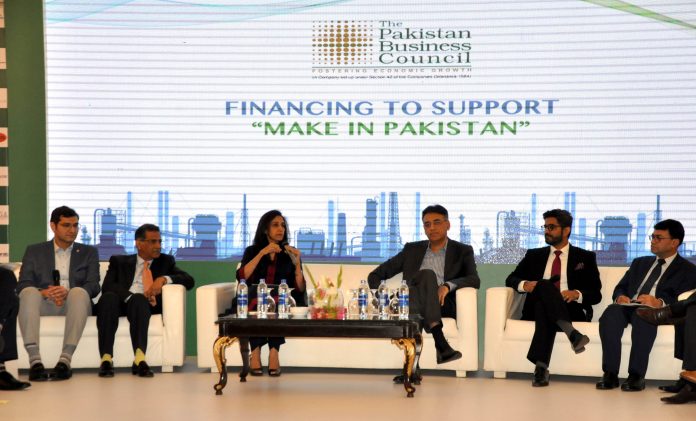 KARACHI: Pakistan Business Council on Saturday organised an event titled “Financing to Support: Make in Pakistan” at a local hotel in Karachi.

The event was attended by important stakeholders ranging from startups, SMEs, agribusinesses to regulators, bankers and government officials.

Although the speakers were only given a time slot of 20 to 25 minutes to submit their presentations, they were still able to touch upon a variety of financing issues plaguing their respective sectors and present alternate models that could work as solutions.

A common subject that all the speakers touched upon was regarding innovations in the finance industry, and that how Fintech was going to be the frontier through which a large proportion of Pakistan’s manufacturing industry’s woes could be solved.

Finance Minister Asad Umar went to the extent of calling the Fintech industry “the only thing that could bring a revolution in our country”.

“To give an idea about the size of the opportunity, there are 3.2 million SMEs in Pakistan, out of which only 180,000 have access to credit from commercial banks. This number has largely remained stagnant and has grown marginally from 135,000 to 180,000 since 2014 and there’s hardly any incentive for commercial banks to make progress,” said Finca Microcredit Bank CEO Mudassar Aqil.

Speaking on the occasion, PSX CEO said, “The stock market brings capital to businesses which create jobs and brings economic growth to Pakistan. Let me be clear- Pakistan cannot succeed on the economic front without a vibrant capital market.”

The question-answer session held towards the end of the event gave the speakers a chance to pose their questions at the finance minister.

Asad Umar, in his response, was quick to put forward his vision of a close collaboration between his government and the private sector. He also conveyed his belief that the dominant economic narrative that governments should stay out of businesses is “absolutely not true if one looks at the facts”.

He also hinted at several regulatory changes in the pipeline that could make the economic environment easier for businesses, one of which was the creation of a dedicated body to regulate the insurance industry.

“Let’s make Pakistan a place where it’s easy to do business, where productive enterprises are facilitated, where the government plays a supportive role, and, most importantly, there is a bond of trust between the government and the business community,” the finance minister stated.

Pakistan Business Council is a think-tank and a business advocacy body composed of 78 lending private sector businesses, including multinational companies in Pakistan. Its members’ sales represent every ninth rupee of the country’s GDP and they contribute 25pc each to national tax revenue and annual exports. Together, they employ over two million in their value chains. PBC members thus have a very significant stake in Pakistan’s economy.

Junaid Hanif
The writer is Business Reporter at Pakistan Today. Apart from his day job, he likes to indulge in the sweet science of Boxing. Reads politics and economics. He can be reached at [email protected]