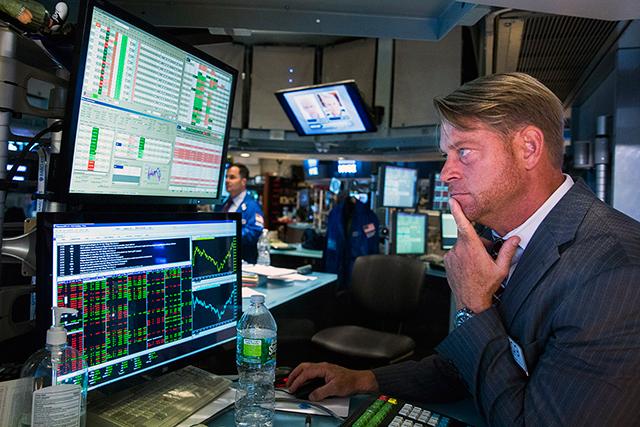 US stocks fell on Monday, extending the previous session’s steep sell-off, hit by worries of a slowdown in global economic growth.

However, Wall Street’s main indexes were still above their session lows in choppy trading. The benchmark S&P 500 is now about 5pc away from its record closing high hit in September.

Weak factory data from the United States, Europe and Japan on Friday led to the inversion of US Treasury yield curve for the first time since 2007, fueling fears of a global economic downturn.

The benchmark US 10-year treasury yields held near more than one-year lows on Monday, while the yield curve between three-month bills and 10-year notes was modestly inverted.

The Federal Reserve also flagged an expected slowdown in the economy last week and decided against raising interest rates this year.

“The market was over-sold on Friday because of slowing growth across the world and we are seeing some of that spill over to today,” said Marc Pfeffer, chief investment strategist at CLS Investments in New York. “We have been vacillating between up and down all day, I think the market is still digesting what is going on and looking for footing.”

Apple Inc’s 0.7pc drop weighed the most on the technology sector. The iPhone maker is expected to launch its video streaming service at an event on Monday.

In a bright spot, the consumer discretionary sector rose 0.31pc, supported by gains in Home Depot Inc and Amazon.com Inc.

The report left unresolved the issue of whether Trump obstructed justice by undermining the investigations that have dogged his presidency.

Top US officials travel to Beijing for the latest round of high-level talks, which are scheduled to start on March 28.

Boeing Co rose 1pc after the planemaker said it would brief pilots and regulators this week on software and training updates for its 737 MAX aircraft, with Ethiopian Airlines and Qatar Airways expressing confidence in the company despite a recent crash.

Akamai Technologies fell 3.5pc, the most on the S&P, after a report that brokerage Deutsche Bank had downgraded the stock to “sell” from “hold”.

Viacom Inc’s shares rose 5.8pc, the most on the S&P, after the company renewed a contract with AT&T Inc to continue carrying its services. AT&T shares dropped 1.2pc.