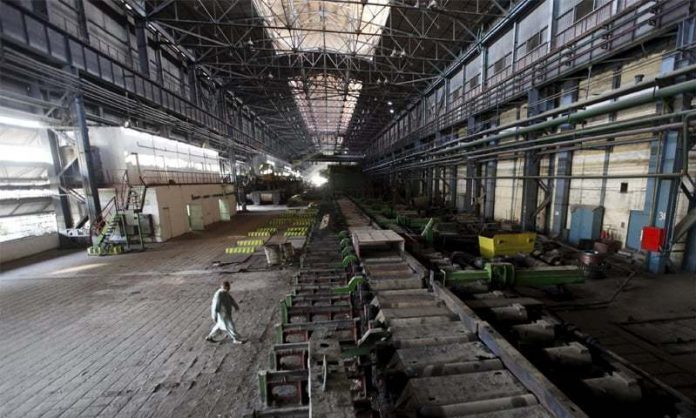 In a media briefing, he said that the technical committee on PSM had recommended the government to form partnerships with private companies in order to revamp the loss-making entity.

“Six companies had approached the government in this regard, including the Russian company that had initially formulated the PSM revival plan,” he said. “International competitive bidding standards will be followed to ensure transparency in the bidding process.”

He said that all the existing workers/employees of PSM will be retained. “The government will ensure that the rights of PSM employees remain intact and nobody is removed from the job.”

The advisor said following the revival plan, PSM could produce three million tonnes of steel per annum while Pakistan’s total demand was around nine million tonnes. “It means that even after the operationalization of PSM, there will be room for new players.”

Presently, he informed, the outstanding dues of PSM stand at Rs2.20 billion while the government was bearing Rs1.30 billion annually to run its affairs.

It is pertinent to mention that PSM was the largest and only integrated steel plant of Pakistan with a production capacity of 1.1 million tonnes per year and was established with the techno-financial assistance of Soviet Union at a cost of Rs24.7 billion. It started production in 1985 and was the only fully integrated complex, as no other company could convert iron ore and coal to steel in Pakistan.

PSM accumulated profits of Rs9.5 billion up to the year 2007-08 but later it went into crisis, which prompted the subsequent governments to arrange for bank loans and bailout packages in order to overcome the corporation’s losses.

The Sui Southern Gas Company had also disconnected its connection with PSM on account of non-payment of dues, thus forcing the mill to close its operations in June 2015.

The past governments, in 1997 and 2006, made efforts to privatize the steel mill. However, the Supreme Court reversed the privatization deals.

Also, the Cabinet Committee on Privatization (CCOP) had approved its privatization in 2014, while the Privatization Commission Board approved to initiate the process for appointment of financial advisers in July 2014.

Under the incumbent government, the Committee of the Cabinet on Privatization on 31st October 2018 decided to delist PSM from the privatization list and in November 2018, the prime minister granted approval for the appointment of experts to chalk out PSM revival strategy.

The basic objective was to make PSM internationally competitive and viable but not at the cost of undermining the industry.

A task force was formed to evaluate the condition of PSM and on April 8, a technical committee made a presentation to the Economic Coordination Committee and gave the revival plan of PSM.

The committee had recommended that there was no need for PSM privatization as it was a national asset and also because the government was facing liquidation issues.