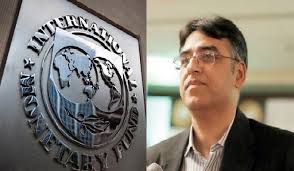 ISLAMABAD: Minister for Finance Asad Umar has said that Pakistan has reached a consensus with the International Monetary Fund on all issues to finalize the bailout package.

Briefing the National Assembly’s Committee on Finance, Revenue and Economic Affair, he said both sides during his recent visit to Washington agreed in principle on the bailout package.

He said that the IMF team will visit Islamabad during the current month to finalise the bailout package amounting to six to eight billion dollars.

The Finance Minister said the IMF had not given any guidelines or made demands regarding electricity and gas tariffs.

He said the government also has no plans to increase the prices of electricity and gas in the coming days.

Later talking to media persons, the finance minister said Pakistan soon would be in a position to seek more financial assistance from the World Bank, Asian Development Bank and big investors in the United States.

Asad Umar said that soon the economy of the country would stabilize and move towards sustainable economic growth.  To a question, the minister said he met Financial Action Task Force (FATF) President Marshall Billingslea during his US visit, who assured him that any decision regarding Pakistan would be taken on technical grounds.

Briefing the committee, Minister of State for Revenue Hammad Azhar said the government’s priority is to broaden the tax net for increasing its revenues.