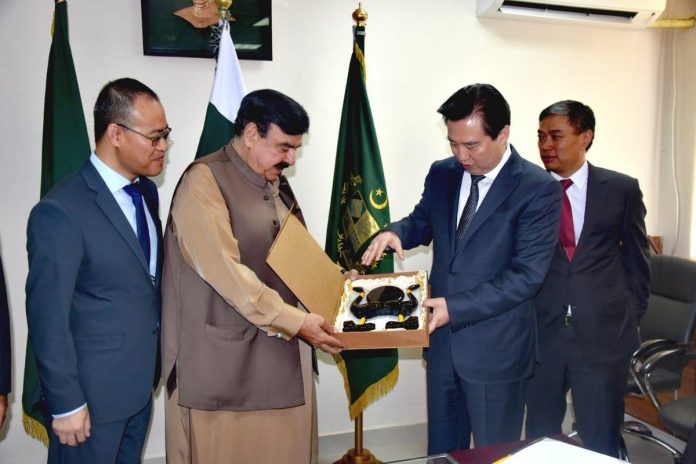 ISLAMABAD: Pakistan and China will sign the preliminary design of ML-1 project during the upcoming visit of Prime Minister Imran Khan to Beijing.

This was stated by Railways Minister Sheikh Rasheed Ahmed while talking to Huang Chuping, Vice-Governor of Chinese province Hubei, in the federal capital on Friday.

He said the completion of Peshawar to Karachi Mainline-I project would revolutionise Pakistan Railways, adding that the projects under the China-Pakistan Economic Corridor have ushered in a golden era of cooperation between the two countries.

The minister invited investors from Hubei province for investment and joint ventures in Mainline-II and thanked the visiting Chinese dignitary for paying visit to Pakistan Railways.

The vice governor on the occasion thanked the people of Pakistan for their love and affection with China and invited the railways minister to pay a special visit to Hubei which.

Last week, the federal minister had said the ML-1 project will provide jobs to 150,000 people of the country.

Rasheed had claimed that he would step down if he failed to provide employment opportunities to 150,000 people after the completion of the project.

Meanwhile, the Karot hydropower project, being developed on a build-own-operate-transfer basis under the ambit of CPEC, is scheduled to be completed by the end of next year.

According to a report, the power station, being built with an investment of $1.74 billion, will have an installed capacity of generating 720 megawatts of electricity.

In addition to power generation, it will help prevent floods and control sediments, besides improving downstream and reservoir area transport services.