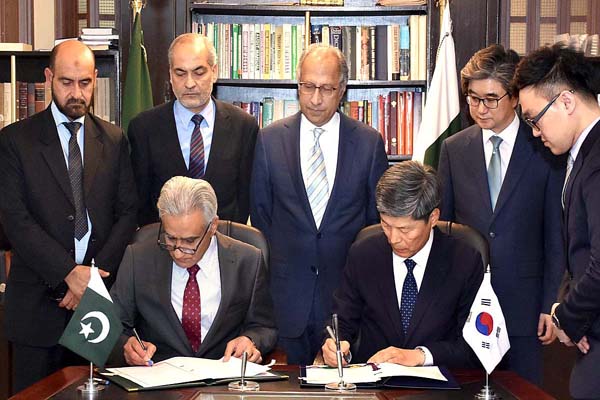 ISLAMABAD: Adviser to Prime Minister on Finance Dr Abdul Hafeez Shaikh on Wednesday witnessed the signing of a $500 million framework arrangement between Pakistan and Republic of Korea.

Economic Affairs Division Secretary Noor Ahmed and Ambassador of the Republic of Korea Kwak Sung-Kyu signed the framework arrangement on behalf of their respective governments.

Under the signed Framework Arrangement (2018-20), South Korea will provide long term concessional financing up to $500 million for the execution of various development projects in health, information technology, communication, agriculture, and energy etc.

Earlier, the ambassador called on the adviser and discussed matters pertaining to the enhancement of bilateral cooperation between the two countries. The adviser informed the envoy that Pakistan attached significant importance to its ties with the Republic of Korea which had so many layers of cooperation with Pakistan in both the public and private sectors.

The adviser appreciated the role and cooperation extended by South Korea for development projects in Pakistan. He said that the economic relations between the two countries would be further strengthened with the passage of time and framework arrangement would enable Pakistan to seek financing from the Korean Exim Bank for infrastructural development in Pakistan.

The Korean ambassador hoped that this arrangement would be instrumental in backing up the economic policies and initiatives being pursued by the new Pakistani government.

He said that the agreement would go a long way in further strengthening bilateral cooperation between the two countries. He added that Korea would extend all possible support for the economic development of Pakistan, which would be greatly conducive to promoting bilateral relations in the years ahead.