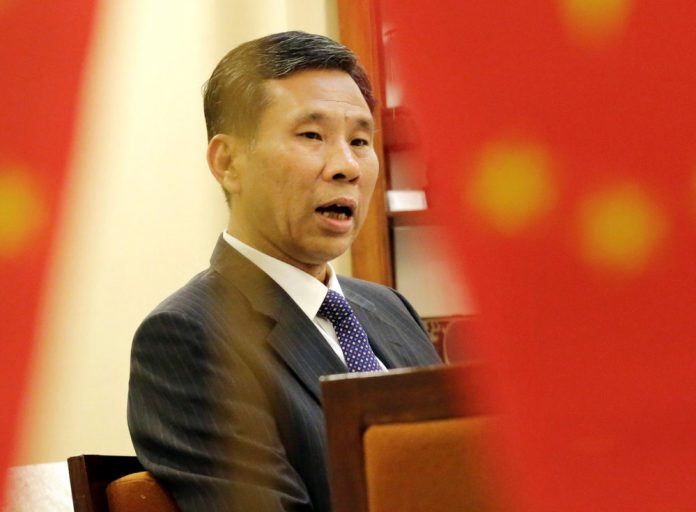 BEIJING: China aims to make the Belt and Road initiative sustainable and prevent debt risks, its finance minister said on Thursday, seeking to allay criticism that the infrastructure plan to boost trade and investment creates a heavy burden for some nations.

The policy championed by Chinese President Xi Jinping has become mired in controversy, with some partner nations bemoaning the high cost of projects, though China has repeatedly said it is not seeking to trap anyone with debt.

Western governments have tended to view it as a means to spread Chinese influence abroad, saddling poor countries with unsustainable debt.

Finance minister Liu Kun, speaking at a forum to kick off a three-day Belt and Road summit in Beijing, said China will establish an analysis framework on debt sustainability for Belt and Road projects to “prevent and resolve debt risks”.

Chinese financial institutions, countries involved in Belt and Road and international agencies are encouraged to use this framework to enhance debt management, Liu said.

While most of the Belt and Road projects are continuing as planned, some have been caught up by changes in government in countries such as Malaysia and the Maldives.

Those that have been shelved for financial reasons include a power plant in Pakistan and an airport in Sierra Leone, and Beijing has in recent months had to rebuff critics by saying that not one country has been burdened with so-called “debt traps”.

Yi Gang, China’s central bank governor, said at the same event that local currencies will be used for investments related to the Belt and Road plan to curb exchange rate risks.

China will follow market principles and rely on commercial funds for Belt and Road financing, Yi said, adding that China will improve transparency for those projects.

“We should strengthen debt and risk management. We should objectively and fully understand debt problems of developing countries,” he added.

In a nod to debt concerns, a draft communique seen by Reuters said that 37 world leaders attending the summit will agree to project financing that respects global debt goals and promotes green growth.

Chinese government officials and heads of state-owned enterprises such as China National Petroleum Corp and China Communications Construction Corp told a separate forum that they would pay more attention to environmental conservation and protection.

They also pledged to undertake higher quality projects that would hire more local staff and respond to the needs of recipient countries.

Jose Vinals, chairman of Standard Chartered Bank, said at the forum he hoped to see the initiative focus more on quality and multilateralism, saying that many projects remained bilateral in the sense that they involved the Chinese government and firms dealing directly with recipient countries.

More opportunities have to be given to other countries as well as the private sector to play a role, he said, adding that bilateral engagement tended to have less transparency and lower levels of governance, which in turn could affect the quality of projects.

“It is very important to emphasize project quality over project quantity,” he said.

Visiting leaders will be headlined by Russia’s Vladimir Putin, as well as Prime Minister Imran Khan of Pakistan, a close China ally and among the biggest recipients of Belt and Road investment, and Prime Minister Giuseppe Conte of Italy, which recently became the first G7 country to sign on to the initiative.

The United States, which has not joined the Belt and Road, is expected to send only lower-level officials, and nobody from Washington, citing concerns over opaque financing practices, poor governance, and disregard for internationally accepted norms.

Washington sent Matt Pottinger, the senior White House official for Asia, to the last Belt and Road summit in 2017.

European officials who attended that summit said then that it would take time to know whether China was going to give foreign companies equal access to projects as their Chinese counterparts.

Maros Sefcovic, the European Commission’s vice president for energy who is attending this week’s forum, told Reuters that European companies were ready to engage, but still had the same complaints as several years earlier, including that the plan lacks a transparent and open bidding process.

“Our difference is that we want to discuss it. We want to negotiate about it. We want to solve it in a cooperative way,” Sefcovic said, referring to the United States downgrading its presence at the forum.

Asked if there was any evidence European companies had more access to Belt and Road projects than two years ago, Sefcovic said: “I’m not sure.”