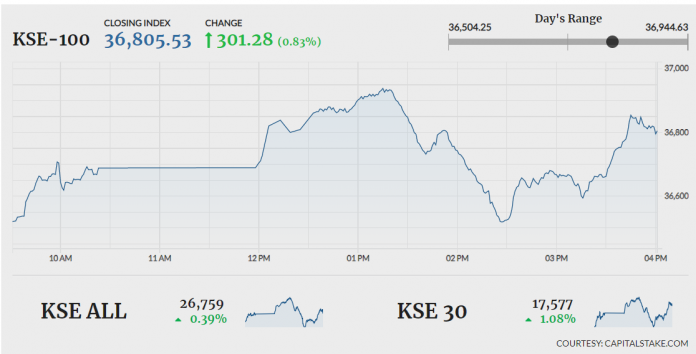 KARACHI: The Pakistan Stock Exchange (PSX) witnessed a volatile session on Thursday, as indices kept swinging between the red and green zones all day long.

Trading remained suspended for some time at the exchange due to a technical glitch. On the other hand, investors remained busy observing financial results. Foreign investors continued as net buyers on Wednesday with a net inflow of $3.21 million.

Bata Pakistan Limited (BATA -5.00pc) declared its financials for the first quarter of FY19. Sales inched by a slight 6pc YoY, while the company’s finance cost increased significantly, which resulted in decreasing the net profit. Earnings per share declined from Rs22.66 in the same period last year to Rs5.84.

Murree Brewery Company Limited (MUREB -1.27pc) announced its financial results for the third quarter of FY19. An interim cash dividend of Rs5 was declared by the company. Sales posted growth of 13.47pc on a quarterly basis, while earnings per share improved from Rs11.05 in the same period last year to Rs11.75 in the current year.

Meezan Bank Limited (MEBL +0.97pc) released its financial performance for the first quarter of FY19. An interim cash dividend of Re1 and bonus shares of 10pc were also declared by the company. Revenue increased by 15.61pc QoQ, while earnings per share almost doubled from Rs1.64 in the same period last year to Rs2.44.