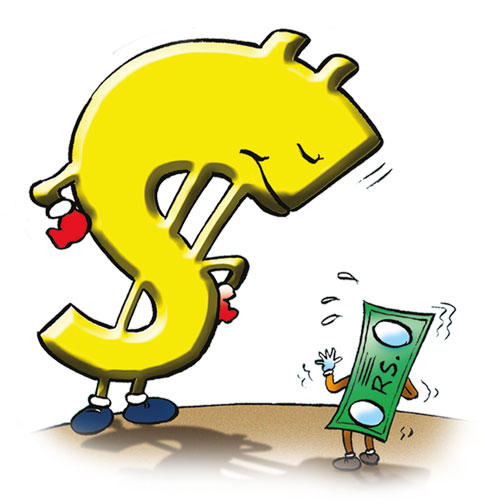 LAHORE: Days after Pakistan struck a deal with the International Monetary Fund (IMF) that allows the open market to regulate exchange rate, US dollar on Wednesday touched an all-time high of Rs146.2 before bouncing back to Rs144.

The increase of Rs2.25, which took the US dollar to record levels in Pakistan, came amid strong speculations that the “local currency will depreciate further in the wake of the Fund’s harsher conditions”.

Pakistan’s $6 billion bailout agreement with the IMF, signed on Sunday, has met with serious criticism, as investors and analysts have expressed serious doubts over the reported conditions of the deal.

“Fears of further devaluation as a result of the agreement with the IMF have depressed the currency market and the rupee may lose more against the greenback in the coming days,” Exchange Companies Association of Pakistan (ECAP) Secretary General Zafar Paracha told a private media outlet.

Yawaruz Zaman, head of Research at Shajar Capital in Karachi, also agreed that the investors have taken the IMF conditions negatively, “especially with regard to the free float of the rupee against the dollar and increasing the interest rate”.

The currency market has been witnessing an acute shortage of US dollars for the last few days.

“I have been struggling to purchase dollars for the last two days. Currency dealers are either saying they don’t have the currency or they can only give up to a certain amount,” said local businessman Amir Shah, who says dollar has gone “scarce” amid rupee’s free float.

Meanwhile, business experts have predicted that apart from the devaluation of the rupee, the upcoming ‘IMF-sponsored budget’ would also result in the contraction of the troubled economy and would take a toll on the masses already struggling to make ends meet.

The new taxation measures to improve the revenue collection would also hit the business community and the masses, widen the gulf between taxpayers and tax collectors, and promote tax evasion, they added.

Meanwhile, Prime Minister Imran Khan met ECAP delegation led by its president Sheikh Bostan at the PM’s Office. During the meeting, the government asserted it would take strict action against Exchange Companies Rate if they deviate from the agreed currency rate.

According to reports, the ECAP would not stand by any company diverging from these set rates and will not stand with the companies running dual sets of rates or avoiding receipting.

The meeting also discussed lowering the greenback export limit to 3,000 instead of 10, 000, though its demand and supply would be improved.

It is pertinent to mention that the value of the US dollar has witnessed an increase of Rs21 (from Rs123 to Rs144) ever since the Pakistan Tehreek-e-Insaf (PTI) took charge of the government.