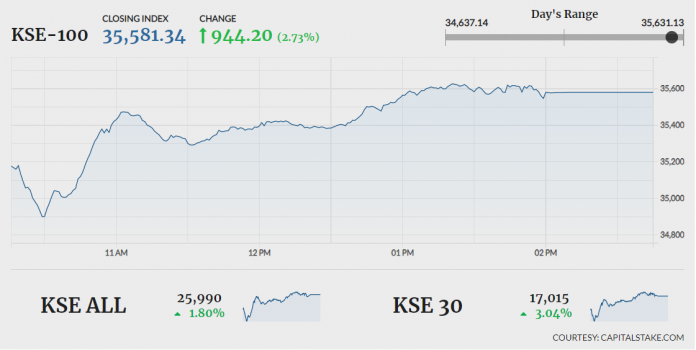 KARACHI: Bulls of the Pakistan Stock Exchange (PSX) were once again successful in conquering the market, as the indices continued on the upward trajectory right from the start of the session on Thursday.

Foreign investors ended as net sellers on Wednesday with a net outflow of $3.48 million.

Fitch Solutions, a US-based global research house, expects stability to return to Pakistan’s economy after the government made two tough decisions in the preceding week. The two steps included a hike in the interest rate by 150 basis points to a 91-month high of 12.25pc, and around 7.5pc depreciation in the value of rupee against the US dollar.

Meanwhile, Adviser to Prime Minister on Finance Dr Abdul Hafeez Shaikh in a tweet on Wednesday announced that Saudi Arabia would extend $3.2 billion per year deferred payment facility with Pakistan for petroleum products starting from July.

Hinopak Motors Limited (HINO +3.12pc) declared its financials for the fiscal year 2018-19. The company’s sales declined by 28pc YoY, while earnings per share deteriorated from Rs92.69 in the previous year to Rs-70.42 in the current period.