US leaves door open to China on trade talks at G20 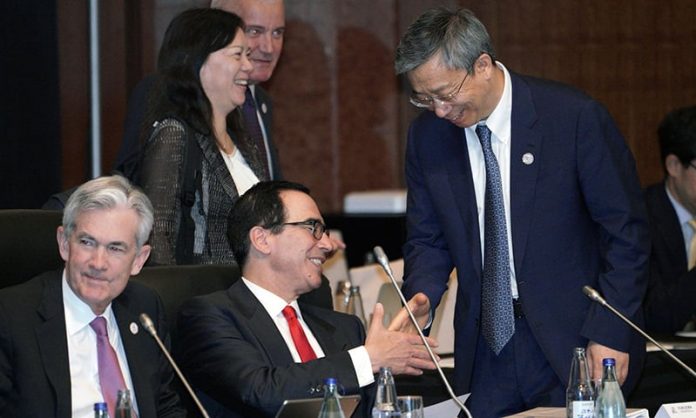 The United States is open to further negotiations with China on their ongoing trade battle but any potential deal will wait until the two leaders meet at the end of the month, Washington’s top finance official said on Saturday.

Speaking to reporters on the sidelines of a meeting of G20 finance ministers and central bank chiefs, Treasury Secretary Steven Mnuchin warned that Washington would press on with tariffs if a deal could not be reached.

“We were on the way to a historic deal. If they want to come back to the table and complete the deal on the terms that we were continuing to negotiate, that will be great. If not, as the president said, we’ll move on with tariffs,” said Mnuchin.

President Donald Trump is expected to meet his Chinese counterpart Xi Jinping at the G20 summit in Osaka on June 28-29 and any potential breakthrough would likely only come then, he predicted.

“I would expect that the main progress will be at the G20 leaders’ meeting between the two presidents,” he said.

Mnuchin said that although he would be holding one-on-one talks with Chinese central bank chief Yi Gang during the G20 finance meeting in the western Japanese city of Fukuoka, this would “not be a negotiating meeting”.

“We’ve been hard at work on what could be a historic agreement for both countries, something that could be economically very important for us and China and for the rest of the world,” he said.

However, he insisted that the current trade relationship between the world’s top two economies was “very unbalanced.”

“Our markets are completely open to them. Their markets have not been open to us,” he said.

He said Washington and Beijing had been “90pc done” on clinching a trade deal before talks collapsed but stressed that the current position was “a result of them backtracking on significant commitments.”

Trump said on June 6 that he would wait until after the G20 summit before deciding whether to impose new tariffs on Chinese goods that could be worth $325 billion.

“The critical meeting will be between the two presidents,” said Mnuchin.

The treasury secretary said he did not believe that the current trade tensions were harming the global economy, one of the key topics being discussed by G20 officials in Fukuoka.

“So I don’t think in any way that the slowdown you are seeing in parts of the world are the result of trade tensions at the moment,” he said.

Nevertheless, if a deal were found, it would be a boon to the global economy as a whole, he predicted.

“People talk about the economic risk of trade wars… people should be even more focused on the benefits of having a great trade agreement and how that creates economic opportunities in both economies, especially for a growing middle-class in China,” he said.

The potential economic benefits for China were “part of the reason I don’t understand why they went back because I think this could be a great outcome for them”.