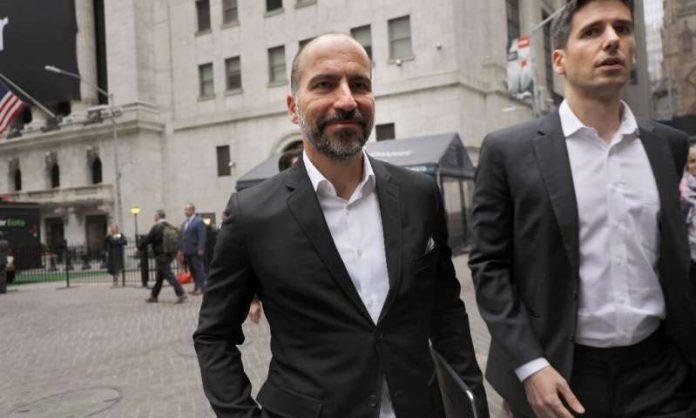 Uber chief Dara Khosrowshahi has put out a word that he is tightening his grip on the wheel at the ride-share firm in the wake of a bumpy stock market debut.

The company’s chief operating officer and head of marketing will leave in a leadership shake-up that will result in Uber’s shared rides and food delivery platforms reporting directly to Khosrowshahi, according to a copy of an internal email provided to AFP.

Khosrowshahi credited the maturing of operations at the San Francisco-based company and the completion of its initial public offering last month with enabling him to make the management moves.

“I now have the ability to be even more involved in the day-to-day operations of our biggest businesses, the core platform of Rides and Eats, and have decided they should report directly to me,” Khosrowshahi said in his message to employees.

“This will allow me to be more hands on and help our leaders problem-solve in real time, while also ensuring that we make our platform vision a reality.”

He cited a need for a clear and consistent “narrative” at Uber when it comes to how the company is seen by consumers, partners, policymakers and the press as a factor in his decision to consolidate the marketing, communications and policy teams.

“There’s never really a right time to announce departures or changes like this, but with the IPO behind us, I felt this was a good moment to simplify our (organization) and set us up for the future,” Khosrowshahi said.

Uber shares that ended the formal trading day down slipped 1.2 percent to $43.63 in after-market trades.

In its first earnings report as a publicly traded company last month, Uber said revenue climbed 20 percent to $3.1 billion from the same quarter last year, but that it lost $1 billion.

The earnings were in line with Wall Street expectations.

After debuting at $45 for the initial public offering — translating to a market value of $82 billion — Uber shares went into reverse.

The decline came amid doubts over Uber’s path to profitability despite one of the biggest tech IPOs ever.

While Uber has lost billions since offering its first rides in 2011 in San Francisco, it envisions becoming the “Amazon of transportation” in a future where people share instead of owning vehicles.