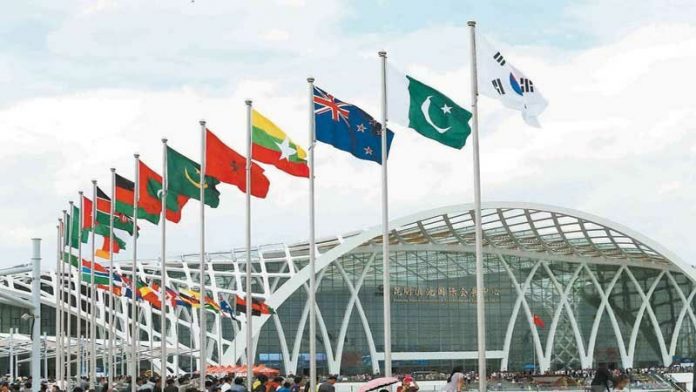 The objective of the expo is to highlight Yunnan province’s key role in Chinese President Xi’s Belt and Road Initiative, under which Pakistan is pursuing the flagship project of China Pakistan Economic Corridor (CPEC).

Pakistan’s indigenous products – from textiles to leather, gems and handicraft –attracted a huge number of local and international entrepreneurs. By setting up 200 stalls, Pakistani businessmen made headway in highlighting the country’s trade potential amongst 3,300 corporate entities from 74 countries at the week-long expo.

“As Pakistan is fast executing the CPEC framework, it is high time to introduce its products at international arena to attract investment,” Islamabad’s Deputy Mayor Zeeshan Naqvi told reporters at the venue.

Naqvi said the reason behind Pakistan’s remarkable representation at the expo is to urge the people avail the immense opportunities offered by CPEC and also in view of Yunnan’s significance being the gateway to Southeast and South Asia.

The events were organised by the Ministry of Foreign Affairs of China and China Council for Promotion of International Trade (CCPIT).

FPCCI President Daroo Khan Achakzai during his interaction with Chinese entrepreneurs said Pakistan’s business community valued China as an important partner in the country’s economic development. He said the involvement of Chinese enterprises, both in terms of technical and financial assistance, in several projects of Pakistan was reflective of the mutual interest and unstinting confidence.

He proposed the establishment of a Secretariat of China-South Asia Cooperation Forum and setting up of liaison offices at foreign affairs departments to facilitate regular communication.

Dean of Media College at the National University of Science and Technology (NUST), Dr Muhammad Arif, spoke about CPEC representing a new model of Pakistan and China cooperation that symbolized win-win approach of development and mutual benefit.

He termed the project an opportunity to learn from China’s path of development and said Pakistan could tap its real potential of modern tourism with Chinese support, proving as panacea for poverty in South Asia.

At the China-South Asia Media Forum, Pakistan’s Consul General at Chengdu Muhammad Mudassir Tipu highlighted the importance of media in economic development and its key role as partner of the state, government, civil society and private sector.

He expressed confidence that with wider participation of senior Pakistani journalists at the forum, millions of people in Pakistan would know about Yunnan’s business and tourism prospects for Southeast and South Asia, including Pakistan.