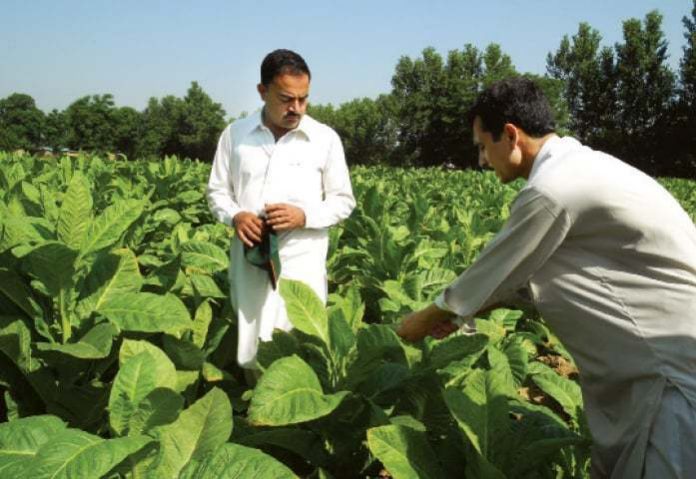 ISLAMABAD: Tobacco growers and industrial workers on Monday condemned Rs300 tax imposed on farmers by the government for the fiscal year 2019-20.

In a press briefing, tobacco growers from Khyber Pakhtunkhwa (KP) and tobacco industrial workers urged the government to fulfil its promise of eliminating Rs300 tax on tobacco growers and impose the levy on multinational tobacco companies.

The representatives of Sarhad Agricultural and Rural Development Organization (SARDO), Kisan Board Pakistan (KBP) and Workers Federation said that the government had committed to imposing the tax on cigarettes, but again it was imposed on tobacco growers.

Haji Abdul Ghani of SARDO said that the government’s move to impose Rs300 per kg on tobacco growers would bring a severe financial burden on the growers and labourers.

He alleged that the multinational tobacco companies provided loan for the raw material to growers on a 36 per cent interest rate, compelling them to sell the tobacco on less rate.

“Under the current economic scenario, the agricultural side needs to be strengthened, but the government is imposing more tax on it,” he stated.

Worker’s Federation President Ibrarullah said on the occasion that non-elimination of Rs300 levy on tobacco growers would bring economic death to the working class.

He alleged that the multinational tobacco companies caused Rs294 million in losses to the national exchequer during the previous financial year.

“The tobacco production decreased by 50pc during the last four years due to discriminatory policies,” he claimed.

Ibrarullah said that the tobacco growers were already paying billions of rupees in the form of taxes to the national exchequer, adding that an additional Rs300 tax would further add to the farmers’ problems.

“The government needs to shift its tax policy to multinational companies that earn billions in revenue through manufacturing,” he added.

He said that thousands of workers would become unemployed while lands would become barren if the tax was not abolished by the government.

KBP President Rizwanullah said that if the government didn’t take back the decision, all concerned bodies would initiate a massive protest against it.

“We will come on roads,” he warned. “No multinational company will be allowed to purchase tobacco from the market.”

He said that the multinational companies’ offices and factories would be locked until the demands were met.