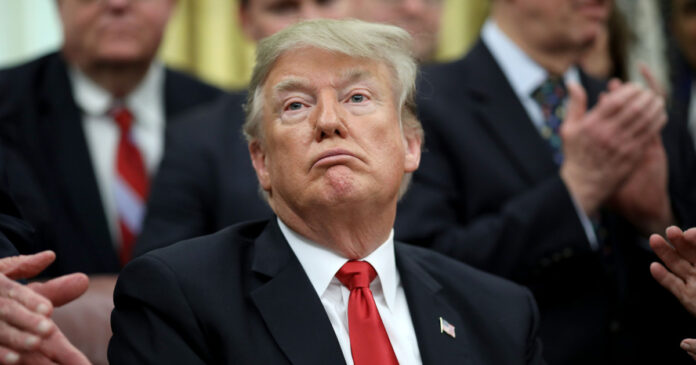 WASHINGTON: US economic growth in 2018 missed the Trump administration’s 3pc target by any measure, which could renew criticism of the White House’s $1.5 trillion in tax cuts.

The Commerce Department said on Friday that gross domestic product increased at a 2.9pc rate last year, confirming an estimate which was published in March. The department’s annual revisions to GDP data also showed the economy growing 2.5pc in the 12 months through the fourth quarter of 2018, down from the previously reported 3.0pc.

President Donald Trump had highlighted the year-on-year growth figure as proof that the tax cuts and a government spending blitz, which have helped to swell the federal government deficit, had put the economy on a sustainable path of strong growth.

The White House and Republicans have argued that the massive tax cuts, which included slashing the corporate tax rate to 21pc from 35pc, would pay for themselves through strong economic growth. Democrats assailed the tax cuts as benefiting wealthy Americans at the expense of the middle-class.

The updated GDP data, and signs that the economy shifted into a lower gear in the second quarter after receiving a boost from exports and accumulation of unsold goods in the first three months of 2019 are undercutting that argument.

Trump likes to showcase the economy as one of the biggest achievements of his first term in office, declaring last July that his administration had “accomplished an economic turnaround of historic proportions.” On the campaign trail, Trump boasted he could boost annual GDP growth to 4pc.

The downgrade to the 2018 year-on-year measure to below 3pc may well irk a commander-in-chief who has been quick to blame the US Federal Reserve in particular for actions he sees as stymieing his growth agenda. The Fed meets on interest rates next week, and Trump has already been jawboning policymakers to cut borrowing costs, which he says would allow the economy to take off “like a rocket ship.”

Economists, though, have long cautioned that the 3pc growth target was unrealistic, given low productivity among other factors. Economists estimate the economy’s growth potential, or the pace at which it can expand without generating too much inflation, at around 2pc.

The updated Commerce Department data also showed growth in the second and third quarters of last year was not as robust as previously estimated, and the economy grew much more slowly in the fourth quarter than had been reported in March.

Still, the economy’s performance in 2018 was an acceleration from the 2.4pc growth notched in 2017. It matched the performance in 2015 during the Obama administration. The economy grew 2.8pc in the 12 months through the fourth quarter of 2017.

The data also showed growth in consumer spending peaking in the second quarter and decelerating sharply in the final three months of 2018.

The downward revisions to the three quarters largely reflected downgrades to business investment, suggesting corporations likely did not plough their tax windfall back into their businesses. Some companies like Apple used their windfall to share buybacks.

But the lower taxes boosted savings last year. The saving rate was raised to 7.7pc from 6.7pc, reflecting upward revisions to repatriated profit from the rest of the world. Corporate profit estimates were, however, marked down in both 2017 and 2018.