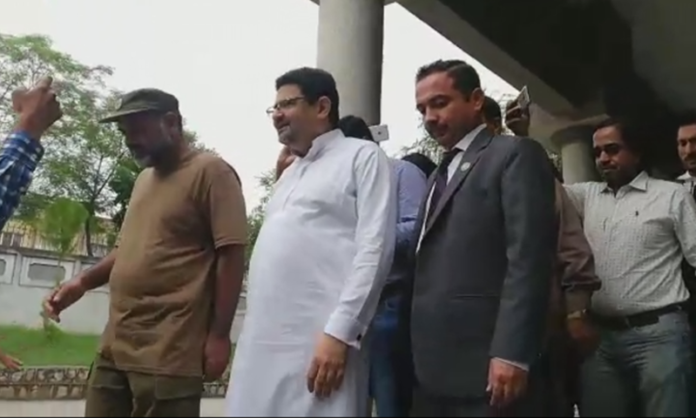 Former finance minister Miftah Ismail was arrested on Wednesday by the National Accountability Bureau after his pre-arrest bail was rejected by the Islamabad High Court, according to media reports.

Ismail, who served as federal finance minister during former prime minister Nawaz Sharif’s tenure, is wanted by NAB in connection with an inquiry which also involved former minister for petroleum and natural resources, the secretary concerned and others regarding the illegal award of LNG terminal-1 to a private company.

Ismail is the leader of Pakistan Muslim League (N) led by Nawaz Sharif who is also currently behind the bar on corruption charges. The bail application submitted by former Pakistan State Oil managing director Sheikh Imranul Haque was also rejected.

IHC Chief Justice Athar Minallah, who was heading a two-judge bench that heard the former finance minister’s application, stated that the Supreme Court had set a standard for granting bail in NAB cases.

“Bail in NAB cases can only be given in cases of hardship,” the judge ruled, rejecting Ismail’s petition. A NAB team took Ismail and Haque into custody soon after the verdict and they were taken away.

Justice Minallah stated that previous judgements of the apex court existed on granting bail under the NAB law, and that Ismail’s lawyer would have to convince the court that he was seeking bail extension due to circumstances of “extreme hardship”.

In response, Haider Waheed, the lawyer representing Ismail, questioned why NAB wanted to arrest Ismail despite his cooperation in the investigation.

“NAB wants to arrest my client due to political reasons,” he said.

The lawyer stated that when the deal for the LNG supply was being finalised, Ismail was working as a non-executive director of the Sui Southern Gas Company. He said the initial negotiations to purchase LNG from Qatar had already been done by the time Ismail took charge of his office.

The country did not import LNG at exorbitant rates during Ismail’s tenure, Waheed argued.

On July 18, the accountability watchdog had carried out a raid at the residence of Ismail, but the PML-N leader was not at his residence. The NAB chairperson had signed the arrest warrant of Ismail.