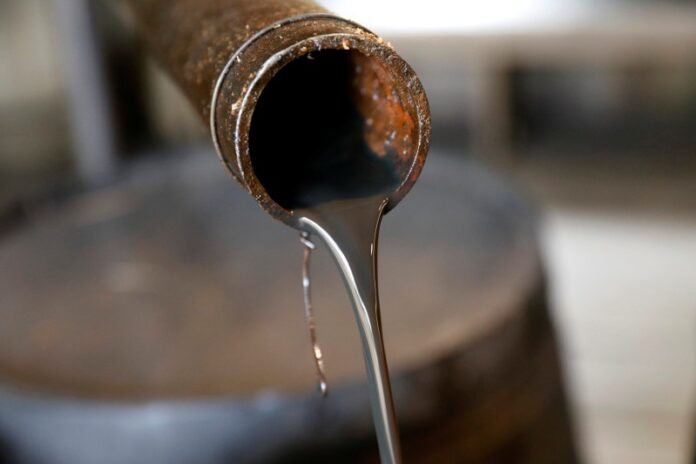 LONDON: Oil prices fell on Wednesday on weak global economic data and a rise in US crude inventories, almost erasing the previous session’s strong gains which followed the United States’ move to delay tariffs on some Chinese products.

China reported a raft of unexpectedly weak data for July, including a surprise drop in industrial output growth to a more than 17-year low, underlining widening economic cracks as the trade war with the United States intensifies.

“Oil is giving up most of Tuesday’s gain as it was reminded of economic realities with China’s industrial output falling to a 17-year low,” said Harry Tchilinguirian, global oil strategist at BNP Paribas in London.

“Yesterday and today’s price action goes to show just how focused and twitchy the oil market is on current and future economic conditions these days and far less so on supply-side developments.”

The global slowdown amplified by tariff conflicts and uncertainty over Brexit is also pressuring European economies. A slump in exports sent Germany’s economy into reverse in the second quarter, data showed.

The euro zone’s GDP barely grew in the second quarter of 2019.

The US Treasury bond yield curve inverted for the first time since 2007, in a sign of investor concern that the world’s biggest economy could be heading for recession.

“We do expect Brent to continue recovering to $65 per barrel in the coming months,” Commerzbank analyst Carsten Fritsch said.

“Oil demand in China and the United States is unlikely to weaken noticeably as a result of the trade conflict, though if this were to happen Saudi Arabia would further reduce its output.”

Benchmark crude prices surged on Tuesday after US President Donald Trump backed off his Sept 1 deadline for 10pc tariffs on some products, affecting about half of the $300 billion target list of Chinese goods.

Crude inventories increased by 3.7 million barrels to 443 million, compared with analyst expectations for a decrease of 2.8 million barrels, the API said.

The United States (US) dollar maintained its upward trend against the Pakistani rupee during intra-trading in the interbank market on Friday. As per reports, the...
Read more
World Business News

MELBOURNE: Oil prices climbed on Friday, extending gains after OPEC+ said it would review supply additions ahead of its next scheduled meeting if the...
Read more
- Advertisement -