Shrinking German economy ‘on edge of recession’ as exports stutter 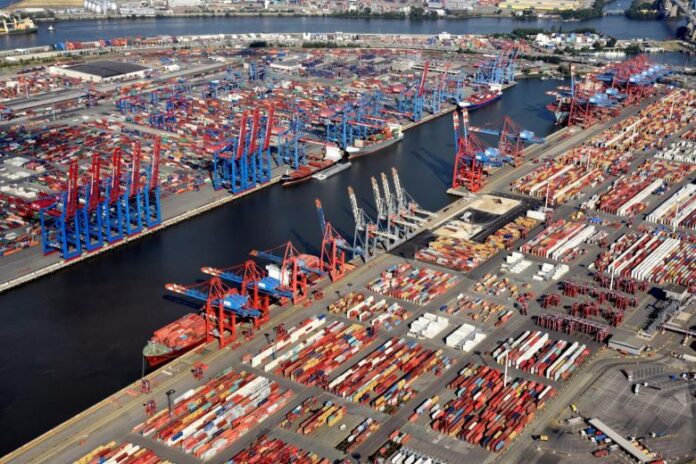 BERLIN: Slumping exports sent Germany’s economy into reverse in the second quarter, with prospects of an early recovery slim as its manufacturers’ struggle at the sharp end of a global slowdown amplified by tariff conflicts and the fallout from Brexit.

Overall output fell 0.1pc quarter-on-quarter, data showed on Wednesday. With pressure growing on a thus far reluctant government to provide more fiscal stimulus, the economy minister said action was needed to prevent a second consecutive quarter of contraction that would tip the country into recession.

The global slowdown, reinforced by Chinese industrial output expanding at its lowest rates in 17 years in July, has broadly impacted the eurozone, where corresponding data showed second-quarter growth halved to 0.2pc.

But Germany’s traditionally export-reliant economy – Europe’s largest – has been particularly vulnerable, amid signs that the boost it has received from a sustained period of surging domestic demand is waning.

“Trade conflicts, global uncertainty and the struggling automotive sector have finally brought (it)… down on its knee.”

On a calendar-adjusted basis, annual growth slowed to 0.4pc from 0.9pc in the first quarter, the Federal Statistics Office data showed, and for 2019 overall Berlin expects growth to drop to just 0.5% from last year’s 1.5pc.

The economy ministry called the outlook subdued, noting that Britain’s scheduled exit from the EU on October 31 looked likely to be a disorderly one, while Economy Minister Peter Altmaier said Wednesday’s data was a wake-up call.

“We are in a phase of economic weakness but not yet in recession. We can avoid that if we take the right measures,” Altmaier told mass-market daily Bild.

His ministry said impetus was unlikely to come from the industrial sector, whose BDI association – in an unusual move -joined a growing chorus of voices urging the government to kick-start growth by ditching its balanced budget rule and finance more public investments through new debt.

A government spokeswoman said Berlin did not currently see “any need for further measures to stabilise the economy,” which was still expected to grow slightly this year.

“The bottom line is that the German economy is teetering on the edge of recession,” Andrew Kenningham from Capital Economics said, noting that exporters were facing an even bigger potential hit if a no-deal Brexit materialised.

Construction was also a drag, after the sector pushed up overall growth in the first three months due to an unusually mild winter.

In a conclusion echoed by the economy ministry and Bundesbank President Jens Weidmann, the office said domestic demand remained robust.

That has become an important growth driver for Germany in recent years as consumers benefit from record-high employment, inflation-busting pay hikes and low borrowing costs.

But UniCredit analyst Andreas Rees suggested the positive impact of those factors was limited.

“For a year now, the German economy has been only crawling forward,” Rees said, with the many uncertainties facing exporters presaging more pain over the rest of the year.

ING’s Brzeski said a national debate about easing fiscal policy to provide stimulus – a focus for international criticism of the government’s economic management since the peak of the financial crisis – would get more heated.

In a guest article in Wednesday’s edition of business daily Handelsblatt, BDI association managing director Joachim Lang said the balanced budget that the government has stuck to rigidly since 2014 “should be called into question in an economically fragile situation”.

On Tuesday, Chancellor Angela Merkel poured cold water on the calls for more fiscal stimulus, and on Wednesday the government spokeswoman said this position had not changed.

“The fiscal policy of the German government is already expansive,” the spokeswoman added.

Merkel had noted the already agreed removal of the Soli income tax surcharge for most employees from 2021, a relief worth some 11 billion euros per year that is likely to support domestic demand and with it overall growth.