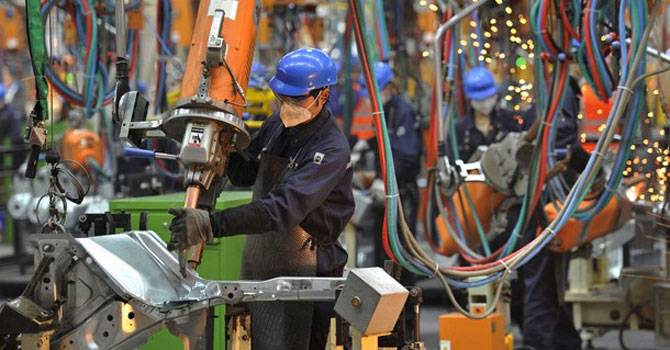 ISLAMABAD: Despite positive economic indicators like reduction in current account deficit and jump in the stock exchange, the fall in Large Scale Manufacturing Industries (LSMI) remains the major concern for the country.

The overall output of the LSM Index decreased by 5.91pc during the first quarter (July-Sept) of FY20, as compared to the corresponding period of last fiscal year.

However, the LSMI witnessed an increase of 1.92pc during the month of September 2019 as compared to August 2019.

The decrease in LSM was mainly led by a 24.61pc dip in electronic products, followed by 8.3pc in chemicals, 6.19pc in petroleum products and 0.83pc in iron and steel products, respectively.

The production data of 11 items under the Oil Companies Advisory Committee registered a decrease of 0.51pc, whereas 36 items under the Ministry of Industries and Production shrank by 3.48pc, while 65 items under Provincial Bureaus of Statistics fell by 1.63pc.

The lacklustre performance of the industrial sector reflects the overall economic slowdown across various sectors in the ongoing fiscal year.

The pharmaceutical sector also suffered due to a considerable lag in regulatory adjustments in prices, which in addition to the weakening of local currency added to the distress of an import-dependent sector. As a result, the production of syrups declined by 20.21pc, tablets 0.48pc, and injections 6.15pc. However, the production of capsules increased 3.6pc during Sept 2019.

Similarly, lower sugarcane production and carry forward from last year’s inventories further dampened the prospects of the sugar industry. In the non-metallic mineral products, cement production was up by 5.28pc in September. The revival in cement production showed more demands as construction activities were picking up momentum in the country.

Moreover, the production of cooking oil and tea blended fell by 0.40pc and 14.37pc, respectively. However, vegetable ghee production increased by 0.97pc YoY in September FY19.