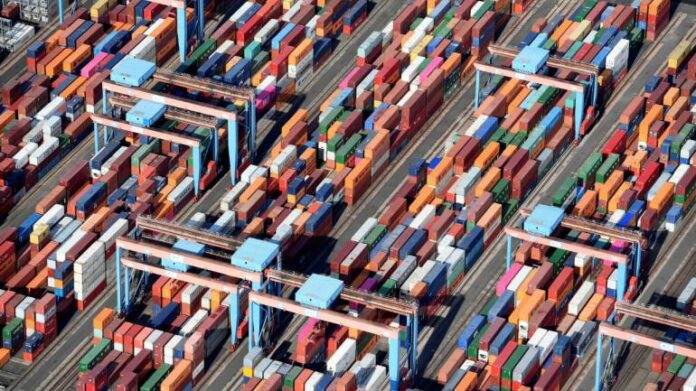 WASHINGTON: The US trade deficit fell to a more than three-year low in November as imports declined further, weighed down by the Trump administration’s trade war with China, and exports rebounded, suggesting solid economic growth in the fourth quarter.

The strength in the economy at the tail end of 2019 was underscored by other data on Tuesday showing activity in the vast services sector picking up in December. Though growth in the fourth quarter will likely be flattered by the plunge in imports, it will probably remain supportive of the Federal Reserve’s description of the economy as being in a “good place.”

The US central bank last month signalled interest rates could remain unchanged at least through this year, after lowering borrowing costs three times in 2019. The economy is holding up despite a deepening downturn in manufacturing. Fears of a recession that dominated last summer have sharply receded.

“The economy may be pulling out of a rough patch,” said Maria Cosma, an economist at Moody’s Analytics in West Chester, Pennsylvania.

The Commerce Department said the trade deficit decreased 8.2pc to $43.1 billion in November, the smallest since October 2016. The trade gap narrowed 0.7pc through November and is on track to record its first annual decline since 2013. Though the shrinking trade bill should be a boost to gross domestic product in the fourth quarter, falling consumer and capital goods imports also suggest a cooling in domestic demand.

The United States and China are embroiled in a bruising trade war, and the White House has also tussled with other trading partners, including the European Union, Brazil and Argentina, accusing them of devaluing their currencies at the expense of US manufacturers.

Though Washington and Beijing in December hammered out a “Phase 1” trade deal, considerable confusion remains about the details of the agreement. President Donald Trump said last Tuesday that the partial deal would be signed on Jan. 15 at the White House.

The 18-month-long US-China trade war has undermined business investment, which together with slowing growth overseas have led to a recession in manufacturing. Economists expect manufacturing to continue to struggle without a complete rolling back of tariffs. Manufacturing’s troubles do not appear to have significantly spilled over to the services industries.

In a separate report on Tuesday, the Institute for Supply Management (ISM) said its non-manufacturing activity index rose to a reading of 55.0 last month from 53.9 in November. A reading above 50 indicates expansion in the services sector, which accounts for more than two-thirds of US economic activity.

But services industries reported a moderation in growth in new orders and hiring. The report came on the heels of a survey from the ISM last week showing its measure of national factory activity dropping in December to its lowest level since June 2009, and contracting for a fifth straight month.

The dollar rose against a basket of currencies. US Treasury yields were steady, while stocks on Wall Street fell.