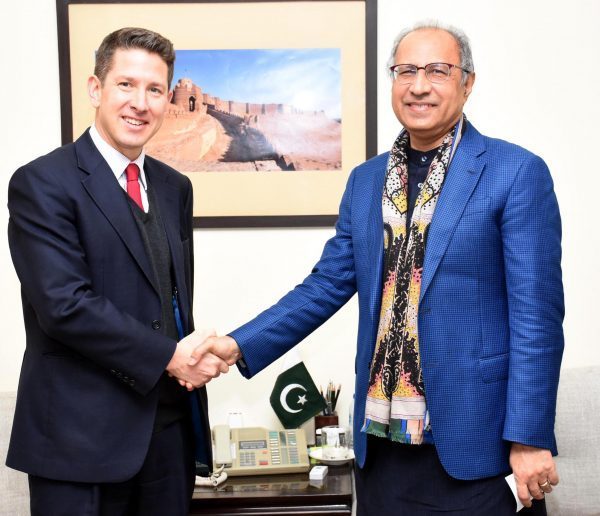 ISLAMABAD: Adviser to the Prime Minister on Finance and Revenue Dr Abdul Hafeez Shaikh has said the government is striving for an export-led growth in the country as the growth fuelled by consumption instead of investments was not sustainable and durable.

“We want quality growth which is led by growth in exports and investments and not driven by mere consumption, which was a pattern in the previous government,” he said while talking to Dr Christian Turner, British High Commissioner to Pakistan who called on the adviser here at the Finance Division the other day.

Shaikh welcomed the gesture of the British government in changing its travel advisory for Pakistan and showing interest in further strengthening bilateral ties in trade and investment. He said the PTI government was also pursuing a broad-based economic reforms agenda by reducing interventions in the market and promoting privatisation process which had been neglected in the last 14 years. He said the government had cut its civil budget by Rs 40 billion while the defence budget had also been reduced in nominal terms. He said the government had not borrowed a single rupee in the last six months from the State Bank of Pakistan (SBP).

The adviser further told the British envoy that the government was also taking corrective measures to minimise the effects of inflation by doubling the budget for social safety net, subsidising gas and power utilities and further revamping and improving its multi-billion cash transfer programme to protect the poor segment from price-hike.

He said the government had done a lot of work in bringing back macroeconomic stability to the economy and a platform had been provided for further economic growth. “This was no easy work as tough decisions were taken to overcome the challenges on the external front, particularly in controlling the current account deficit, and the efforts had resulted in primary balance becoming surplus for the first time in many years,” he added.

The adviser also spoke of Pakistan’s exports which had started showing an upward trend after having remained stagnant for almost five years. He said the revenue collection had jumped by nearly 16 percent while foreign direct investment and portfolio investment had also gone up manifold.

He said the government had reduced the circular debt in the power sector from nearly Rs 30 billion a month to Rs 10-12 billion a month. He said the prices of electricity were on the higher because of the failure of previous government for not increasing the electricity prices in its last 18 months, which led to a ballooning circular debt. “However, the government is protecting nearly 72 percent electricity consumers and 92 per cent agricultural tube-wells from any upward increase in power tariff by providing them subsidy,” he added.

On the occasion, Dr Christian Turner said his country supported the ongoing economic reforms in Pakistan and saw the omy as a key area for future collaborations.

He said he was interacting with the government economic team to find avenues for deepening of bilateral trade and investment. He said the British Airways had started its operations in Pakistan while travel advisory for Pakistan was also being changed to encourage more British businessmen and tourists to visit Pakistan.