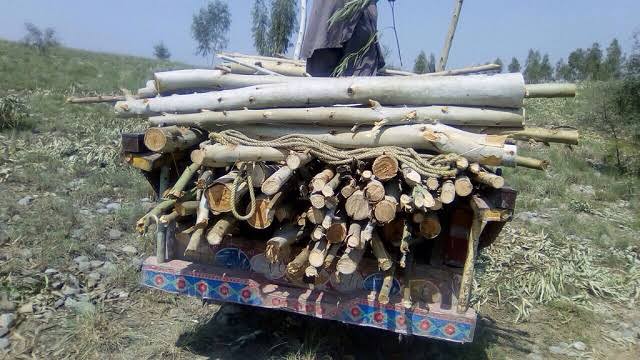 ISLAMABAD: Despite a countrywide ban on the cutting of trees to stop deforestation, it seems that the country’s timber mafia has again succeeded in legalising the supply of timber from Gilgit Baltistan for next five months.

In line with the practices of the past, the timber mafia, in the name of lifting leftover timber, has again succeeded in making it legal to supply billions of rupees worth timber from Gilgit Baltistan to rest of the country, which according to GB government “is the last chance given for the traders”.

Although the Pakistan Tehreek-e-Insaf (PTI) government had initially taken strict action against the trade of illegally–cut timber across the country, especially in Khyber Pakhtunkhwa and GB, to stop further deforestation, the GB government has blown up the restriction on timber trade by allowing the movement of timber, both legally and illegally, for five months.

Interestingly, the fresh permission given on January 31, 2020, will be the “Last Ever to be Given” timber disposal policy for private forests of Diamer district in GB, a notification of the regional government, a copy of which is available, said.

According to sources, similar permissions had also been issued in the past on the pretext that “only leftover timber is allowed to be traded while new chopping of trees is restricted”.

But the mafia usually cuts green trees throughout the year and waits for similar permissions from the government for disposal of billions of rupees worth stored timber, they alleged.

“Influential timber mafia sitting in the government and opposition parties always gets relief and concession, which results in rapid deforestation in the country,” deplored All Pakistan Timber Traders Association (APTTA) Chairman Muhammad Sharjeel Goplani while talking to this scribe.

As per the notification of GB, the Forest, Wildlife & Environment Department has promulgated “The Timber Disposal Policy (TDP) 2020” for Diamer district with effect from February 1, 2020.

Under the TDP, which will expire on June 30, the legal timber shall be allowed for transportation from Diamer district to other parts of the country subject to verification on case-to-case basis within the stipulated five months period. After that, leftover timber will be confiscated and auctioned by the GB government through the department.

The illegal timber shall be allowed for transportation from Diamer district to other parts of country only after imposing fine of Rs660, Rs440 and Rs330 per CFT on trade of Deodar, Kail and Fir/Spruce respectively.

The policy will be suspended at any stage for concerned forest ranges if gross violation of cutting of green trees takes place or reported in any forest range of Diamer District.

All the forest lessees/contractors/owners/beneficiaries etc. involved in the timber business and the political representatives of Diamer district shall present and submit affidavit/ judicial bond for not claiming any future amnesty or extension of this policy after expiry of TDP 2020.

All timber owners shall also be bound to submit bonds to the DFO concerned that there is no litigation on transportation of timber. The timber owners will lose their right on the timber if they fail to transport during the stipulated time period of TDP 2020.

According to a resident of Diamer, the cutting of pine nut trees was causing a loss of around Rs15 billion loss to the national exchequer. The timber mafia was paying Rs40 per foot to the local people and selling them at Rs6,000 per foot in the market.