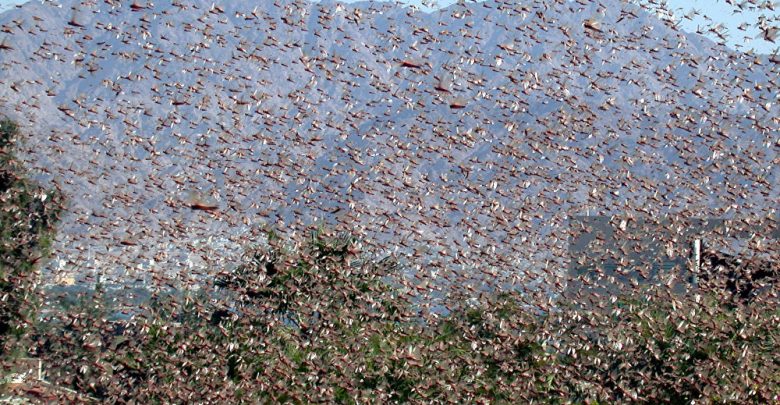 On a sweltering July afternoon, Ghulam Abbas Nabi is taking a richly deserved siesta away from the attentions of the cruel sun when he is interrupted by hysterical screaming. Still groggy and more than a little annoyed, Ghulam Abbas stumbles towards the commotion only to find a disaster of biblical proportions waiting for him.

A dark mass is descending from the skies. As it buzzes and hums, nearly blocking out the sun, he has no idea what to do. The 46 year old has managed his 52 hectare farm for decades, but nothing could have prepared him for this.

Perhaps the scariest thing is how suddenly it happens. Not too long ago he was going around distributing fertilizer to his workers and admiring what looked to be an abundant harvest in a few months time.

By the time the screaming woman makes her way from the adjacent field, any remaining signs of sleep have disappeared. Abida Ali, a young girl working on Ghulam Nabi’s farm in Thari Mirwah in Sindh is otherwise considered a diligent, level-headed worker. Today, she is afraid for her life.

“As soon as I stepped out of my room, I found myself under a sea of hovering locusts. They were everywhere. In my backyard orchard, in the cotton fields, on date trees and on every grimery root, shrub and piece of vegetation they could find” he tells us, voice still shaky at the thought. “They spared nothing.”

Try out our new feature: Listen to the full article below

The next few days could have come out of Lord of the Flies. As the farmers gathered and fought for their voice to be heard, they immediately turned to fire. They tried to smoke the locusts out, but to no benefit. The invaders stayed, lounging and gorging on the hard toiled farmland. When that did not work, pesticides were suggested. But with so many, there was the fear that it would end up poisoning the land.

With no solution coming to fore, tensions began to rise. And with more than vocal mutterings of this being a divine catastrophe, one wonders how far things would have gone. However, the people of Thari Mirwah were lucky, if you can call it that, because the locusts left on their own accord in a fortnight. They had devoured everything, and it was on to the next farm.

“The locusts left only because there was nothing left for them to eat. We just had to wait and watch as our hard work went to waste, there was no contact from any government agency or department to offer advice let alone help” Ghulam Abbas tells us. “It has left me ruined financially.”

In the past few months, there have been multiple reports of locusts swarming in and destroying crops before moving on to their next target. But the problem is not a new one for civilization.

It is of biblical proportions precisely because farmers have been facing it since that time and before. The Hebrew bible with its trigger happy, plague sending God is considered an important indicator of history as it is as a religious and literary text.

“Stretch out your hand over Egypt so that locusts swarm over the land and devour everything growing in the fields,” God orders Moses in Exodus. “They invaded all Egypt. Never before had there been such a plague of locusts, nor will there ever be again.”

There is no doubt an “invasion” of this proportion is hell to live through. It is as frightening as it is devastating. Often considered a freak occurrence, there are ways to combat it. But with an unprecedented amount of incidents being reported and studies linking climate change and rising temperatures to more frequent and more deadly attacks, Pakistan may have to brace for impact.

Ghulam Abbas lost all of his crops in the face of the swarm, with no assistance. But while he may be one of the many down for the count, the government seems to finally be realising the gravity of the situation. The current Pakistan Thereek-e-Insaaf (PTI) government declared a state of national emergency on January 31st this year in the face of the attack of the locusts. But will that be enough to secure crops in Punjab, Sindh and Khyber Pakhtunkhwa (KP)?

According to him, the swarm vandalised the already vegetation-starved Balochistan but without anyone from the federal government batting an eye. In fact, initial reports of the swarms in Sindh also so little to no attention. It was only when the locusts became visible in Karachi and later on more clearly in interior Sindh that the alarm bells began to ring.

Late is it may have been according to Durrani, Prime Minister Imran Khan himself gave the nod to declaring national emergency, and also approved a national action plan allocating Rs7.3 billion to overcome the possibly catastrophic crisis.

The decision to approve the allocation was made during a high power meeting at the PM office attended by the Food Minister Khusro Bakhtiyar, Adviser to the Prime Minister on Finance Dr. Hafeez Sheikh, Special Assistant to the Prime Minister on Information Dr. Firdous Ashiq Awan and National Disaster Management Authority (NDMA) chairman Lt General Muhammad Afzal.

As a result of the meeting, the Prime Minister directed the concerned officials at the district level to deal with the threat. More importantly, the NDMA was given jurisdiction on this. “The protection of farmers and farms is the highest priority of the PTI government” Dawn reported the Prime Minister as saying. For all intents and purposes, in the middle of all the bureaucratic jargon, it was a declaration of war against grasshoppers.

The challenge is a new one for everyone. Pakistan has had one previous experience with  locust attack when a swarm invaded the country back in 1993 under the Premiership of Benazir Bhutto. Aircraft spraying had worked then, and the government will be hoping that it works again, except the attack in 93 was nowhere near as large as the one underway currently. Despite that, the PPP administration had been quicker to address the issue and seemed to have taken it more seriously as well.

In the immediate aftermath of the meeting chaired by Imran Khan, the battle plans dictated an aerial blitzkrieg of pesticides to save crops from swarms of locusts. However, while the plans had been ambitious, the government may not have had the resources to actually pull it off. Speaking on the floor of the house, Food Minister Khusro Bakhtiyar told lawmakers that his ministry, which once had 20 aircrafts, now only has three operational aircrafts. The three planes are currently being run haggard trying to cover nearly 20,000 acres of farmland.

Basically, the ministry cannot do it on its own, and for the next year and a half will need the support and cooperation of the federal, provincial and local government, as well as the NDMA.

“A sum of Rs7.3 billion is required to avoid further destruction by the crop-eating grasshopper and for damage control,” Khusro Bakhtiar said in his address to parliament. Climate change is one of the major reasons for the delay in the exit of locusts.

“Back when this happened in 1993, locusts had not been traced in KP. But this time around they have been found as far as Dera Ismail Khan” he said.

“At last check, the locusts had entered Cholistan Nara from Sindh and Balochistan. Previously, locusts used to move to Iran after sometime, but this time around they extended their stay in Pakistan maybe due to the extended winter.”

So how bad is it?

We have been saying that the invasion is bad. But how bad is bad? To give you an idea, a swarm of locusts can consist of anywhere between 30 million to 50 million, and they reproduce rapidly. In Africa, a swarm was recorded at 800 miles long. The insects travel 150 kilometers a day and the entire swarm can devour 200 tonnes of food a day. Since June of last year, the swarms have made their way to all four of the provinces, leaving havoc in their wake. If left unattended, such an attack could possibly lead to food security issues in the months and years to come.

The one trickle of good news in all of this has been that the swarms of desert locusts have not affected the wheat crop in any significant way. University of Agriculture Faisalabad  (UAF’s) Prof Dr Hassan told the media that teams of entomologists had been dispatched to different areas of Punjab for the on-field study of locust attack, which have determined that it is unlikely for the wheat crop to be affected.

The agriculture expert added that the Vice Chancellor (VC) of UAF has directed the team of entomologists to study locusts life history, attacked areas, management techniques, various stages and effect of climate change.

“The team of entomologists has been asked to come up with viable recommendations for addressing this serious issue and guiding farmers how to mitigate their losses,” the agriculture expert added.

Dr. Waqar, an agriculture expert from Lahore, told Profit that it is a serious matter that locust is a dessert insect that is now moving on to the plain cultivated areas of Pakistan in Sindh, Punjab and KP.

But to food ministry officials, it is clear that there is no time to mull over why this is happening, and even if one were to sit down and theorize, the answer is looking us straight in the face: climate change.

“If lower temperatures continue and the weather remains cold and wet for a longer period of time, it will be catastrophic for the country as locusts would spread even further. In fact, a fresh swarm could very well leave its breeding ground on the Pakistan-India border along Cholistan and create a two from battle for us” he warned.

Agreeing with him, another crop assessment official says that it is the need of the hour that govt addresses the situation on war footings. Otherwise, it would be unlikely to control the outbreak until drier weather sets in. By then, it will be too late.

The biggest losers in all of this have been the affected farmers. All of those that have had to face the plague are unhappy not just with the government’s preparations, but also their response after the fact. For the ones that are yet to face the plundering horde, there is fear. Some farmers are quite literally ritually beating drums to keep the bugs away, and others are counter productive burning things so the smoke keeps them away.

Farmers from the affected areas of Sindh and Punjab have strongly condemned the inaction of the federal and provincial governments in dealing with this grave situation.

Following countrywide locust attacks, farmers have reached the government for an increase in the scope of crop insurance by incorporating pest attacks to the scheme.

The crop insurance scheme was launched in 2018 by the Punjab government to provide cover to farmers growing cotton, rice and wheat (added in 2019) against floods, rain or any other natural calamity.

But the crop insurance scheme does not provide a cushion for pest attacks, something that has, in fact, been a long standing demand of farmers, who seem to have more foresight than the government.

Shahbaz Khan Sahu, a mustard farmer from Lodhran in South Punjab, whose mustard crop was badly damaged by swarms of locusts told Profit that the government must increase the scope of crop insurance scheme. “A large number of farmers who grow oilseed, especially mustard, have suffered huge losses in South Punjab this time around” he said. Until now, their demands have only be met with silence, and promises that the overworked planes will eventually get to them too.