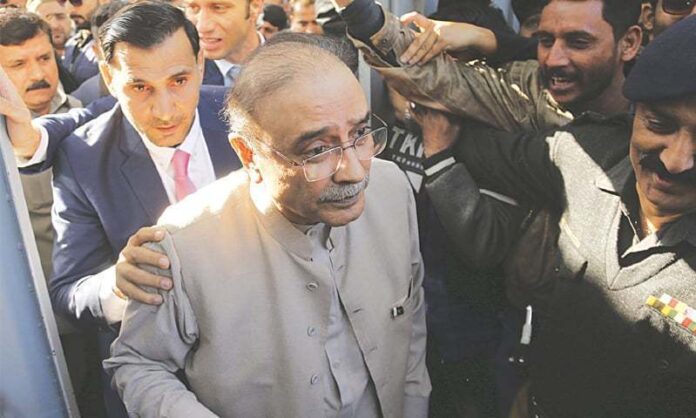 ISLAMABAD: The Benami Transactions Adjudicating Authority (BTAA) will hold on Tuesday (tomorrow) a hearing against the close aides of PPP Co-chairperson Asif Ali Zardari in the benami companies’ reference filed by the anti-benami zone of the Federal Board of Revenue (FBR).

Sources said the lead member and member (branch-III Karachi) of BTAA would hold adjudication proceedings for the above cases in Karachi.

Sources claimed Anwar Majeed, Abdul Ghani Majeed, Salam Younus and others were the beneficial owners in the Plaza Enterprises’ reference as they had been accused of keeping benami properties of more than 3,000 square feet in the Civil Lines quarters in Karachi on benamidars Plaza Enterprises, Imran Khan, Azam Wazir Khan and Aurangzeb Khan.

In Sky Pak Holding’s reference, Majeed and family and Younus Kedwie had been accused of keeping more than 2.2 million shares of the Thatta Cement on Sky Pak Holding and other benamidars.

Sources said the FBR’ benami zone had also filed a reference against Abdul Ghani Majeed, Younus Kedwai and others of the Omni Group in the Golden Globe Holding scandal.

They have been accused of keeping more than 0.8 million shares of Thatta Cement on Golden Globe Holding and other benamidars, they added.