‘Govt focusing on export-led growth through development of SEZs’ 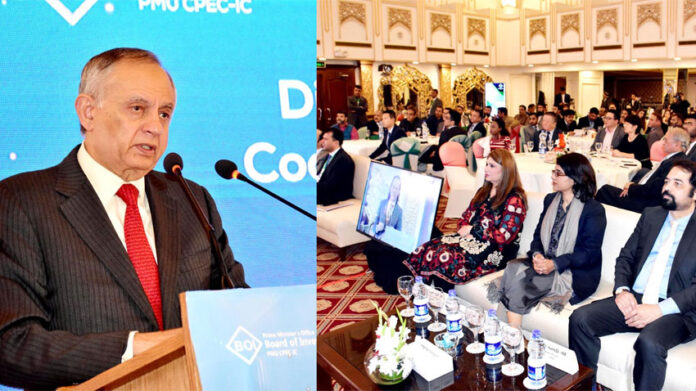 ISLAMABAD: Adviser to Prime Minister on Commerce Abdul Razak Dawood said on Tuesday that the government’s strategy for the future of the country was being prepared considering China-Pakistan Economic Corridor and the Special Economic Zones being developed under the corridor.

He was addressing an event titled ‘Dialogue on Industrial Cooperation under CPEC and SEZs Framework’, organized by the Board of Investment in Islamabad.

Chinese Ambassador Yao Jing also spoke during the event, which was attended by businessmen, academia, government officials, members of the diplomatic community and other important stakeholders.

Dawood laid out the framework of economic development strategy and stated that the future lies in export-led growth strategy, which makes the development of SEZs more vital to improve the capacity and to complement the export requirements of the country.

He explained that Pakistan’s economy faced a lot of challenges, in terms of fiscal and current account deficits, and required serious steps in terms of devaluation, control on imports and government expenditures.

He apprised the participants that export-led growth strategy has already started bearing fruits as Pakistan had posted 13.6pc growth in exports during February 2020 (in terms of value), while all other regional competitors showed a decreasing trend.

The adviser appreciated the efforts of exporters and businessmen for achieving this result and expressed his gratitude towards China for the phase-II of the Free Trade Agreement, which, according to him, was poised to further boost growth in overall exports of Pakistan.

Explaining the objective of Special Economic Zones under CPEC, Dawood informed that the SEZs were open for businessmen from all countries and nationalities, as lucrative incentives under SEZs were the same for everyone.

He added that investments in various sectors have started to pour in and that this momentum would pick up in the coming days. Dawood underscored that the second phase of CPEC was about “industrial and agricultural cooperation”, while the next phase would be about connectivity with regional and global markets, as a part of the overall Belt and Road Initiative.

Earlier, talking to the gathering, the Chinese ambassador explained that the second phase of CPEC would include the engagement of private sector, local community and society at large.

He underlined that the current phase of CPEC would cover cooperation in industrial, agriculture, social, poverty alleviation and science & technology sectors, with an aim to boost the economy of Pakistan as well as to raise the skillset and living standards of the local population.

At the beginning of the event, BOI Secretary Omer Rasul gave a brief outline of the entire day and encouraged the participants to come forth with questions and valuable suggestions, which would help BOI in fulfilling the objectives of the event planned by BOI and setting a tone for policymaking in the future.