Consumers get some breaks, but layoffs keep coming 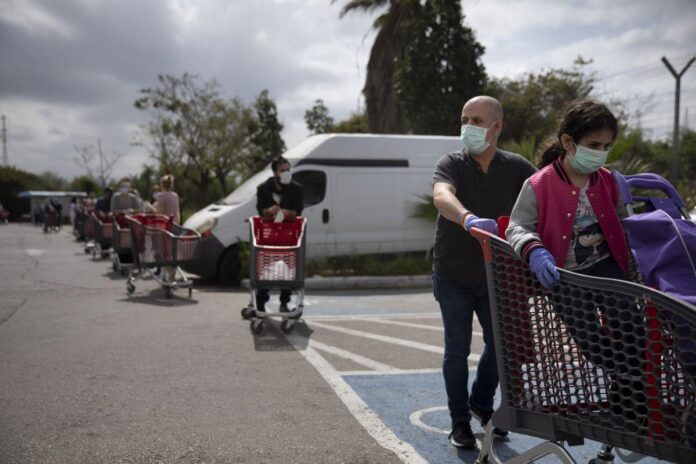 CUSTOMERS FIRST: The pandemic is sapping trillions from the economy and the ramifications for businesses, from banks to restaurants, is expected to be severe. Companies have also recognized their customer are suffering and many are extending a hand.

— Millions of one-time drivers are staying off the road. Allstate is sending shelter-in-place paybacks to customers, with most getting checks for 15pc of their monthly premium in April and May. Auto and home owners customers with financial difficulties can delay two consecutive premium payments, and some will be allowed to pay what they can afford.

The insurer is sending out $600 million to customers, according to a regulatory filing.

— With thousands having lost jobs, JPMorgan Chase has done away with minimum payment requirements on credit cards and it’s waiving late fees. The bank will not report payment deferrals, such as late payments, to credit bureaus for up-to-date clients.

JOBS FALLOUT: Few industries have been spared from mass layoffs, but it’s been severe for manufacturers and restaurants devastated by social distancing.

— BJ’s Restaurants is laying off about 16,000 workers. The casual-dining chain paid all hourly restaurant employees accrued, unused vacation and sick time, and gave short-term emergency paid time off to employees not otherwise eligible for sick pay benefits under state or local laws. BJ’s expects to bring workers back, but acknowledged it may close a number of locations.

The chain, with operations in 29 states, will not pay property leaseholders this month, according to a regulatory filing Tuesday, and will seek a restructuring of those agreements.

— Nissan is laying off about 10,000 workers as it extends its production suspension until at least April 27. The workers won’t be paid during the extension, a change from a shutdown in March when workers got their normal paychecks.

— Honda will stop paying its roughly 14,400 production workers in Ohio, Indiana, Alabama, Georgia and South Carolina as it extended its production shutdown through May 1. Workers will continue to get health insurance and other benefits.

— Thousands of Spirit AeroSystems employees are being furloughed for three weeks without pay. Most managers and hourly employees at Spirit, Wichita’s largest employer, were informed in a company email that they will be placed on 21-day unpaid leave starting Wednesday. Spirit has been hammered by problems at Boeing and it’s troubled 737 Max aircraft. The furloughs apply to Spirit employees associated with the company’s Boeing commercial program in San Antonio and in Tulsa and McAlester, Oklahoma.

UNCONFIRMED: Misinformation and sketchy facts about the virus, and potential cures, are also spreading fast. Of course, social media has become the conduit in many cases.

— WhatsApp tightened restrictions on message forwarding to cut down on coronavirus-related misinformation. The Facebook company on Tuesday said users getting a “frequently forwarded” message — one already shared by five or more people — will only be able to send it to one chat group at a time.

WhatsApp said in a blog post that “we’ve recently seen a significant increase in the amount of forwarding which users have told us can feel overwhelming and can contribute to the spread of misinformation.”

TESTING: There has been a lot of criticism over the failure in the US to secure widespread testing for the coronavirus. The volume remains far from what medical experts believe would provide a clear picture of the spread of the virus. But there are minor advances.

— Walgreens is expanding COVID-19 drive-thru testing to 15 sites in seven states after starting with one location last month. The new locations are in Arizona, Florida, Illinois, Kentucky, Louisiana, Tennessee and Texas, regions experiencing escalating rates of COVID-19. Walgreens expects to be able to test 3,000 people per day across the locations, which will begin operating later this week.

OIL PATCH: Crude prices have fallen almost 60pc in the past three months and economists believe demand will be severely clipped by the virus and a global economy that was already slowing.

— Exxon Mobil is slashing its capital spending budget for 2020 by 30pc, a once unthinkable retreat for one of the world’s biggest energy producers. The company said Tuesday its capital investments for 2020 are expected to be $23 billion, down from the previously announced $33 billion.

MARKETS: Markets have roiled for weeks because so much about the virus is unknown. This week, investors are surging back into markets with some data showing infections are leveling off it hot spots like New York City.

— Stocks are higher in midday trading on Wall Street Tuesday as markets around the world aimed to add to their huge rally from a day earlier.