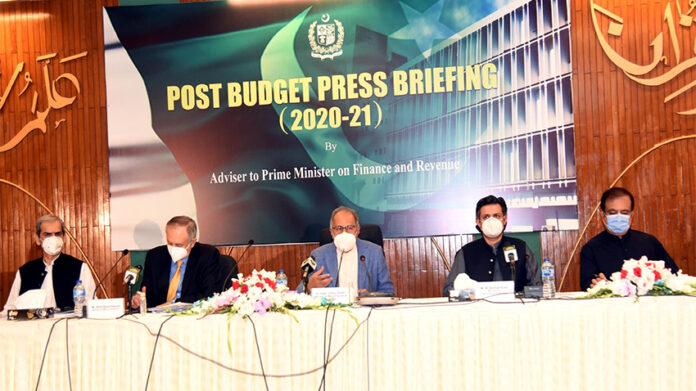 –Industries minister says private sector should generate jobs after up to Rs50bn relief in taxes, duties

ISLAMABAD: The Pakistan Tehreek-e-Insaf (PTI) government cannot give jobs to people in this “grim” situation, its economic team announced during the post-budget press conference on Saturday.

Earlier in March, just before the coronavirus outbreak began in Pakistan, Prime Minister Imran Khan had promised that 2020 would be the year of jobs and housing facilities for deserving people. Soon after assuming the PM’s office, Imran had repeatedly announced that his government would create 10 million jobs for the youth and would turn Pakistan into an Islamic welfare state, raising expectations of his supporters, however, his pledges have been checked by a worsening economic outlook.

A whopping increase of Rs9,209bn has been witnessed in government debt during the first 20 months of the PTI tenure.

Addressing the media alongside PM’s Finance Adviser Dr Abdul Hafeez Shaikh, Federal Minister for Industries Hammad Azhar said that jobs can be created by giving incentives to the private sector.

In addition to this, PM’s finance adviser Dr Shaikh said that the government has announced all the measures to end unemployment in the country.

“We want to give more benefits to people and the PM has also given directions to facilitate the vulnerable segment of society, for this, we have allocated more money in Ehsaas programme apart from giving soft loans to more than 6,000 business enterprise in last two months.”

The government would have increased its allocation for BISP [Ehsaas] manifold if it did not have repayment obligations, he said.

“We inherited a broken economy. PTI’s government had to repay billions of dollars in loans. But we still managed to collect Rs1,600bn in non-tax revenues,” Sheikh said, adding that the entire world was “praising” the government’s economic performance.

“The International Monetary Fund (IMF) board praised us. Moody’s increased our rating. Bloomberg called our stock market the best in the world in December 2019. We witnessed a 137 per cent increase in foreign direct investment (FDI),” he told the presser.

“All of these things were happening but then came the coronavirus [outbreak] and that hurt our economy,” he added.

He said that Pakistan has to repay around Rs2,900bn in the upcoming year and also paid Rs3,000bn in the outgoing year. “We are borrowing money to repay the old ones and no one can blame the PTI government for this,” the adviser said.

FBR has also proposed to end withholding tax on 10 different items apart from decreasing taxes from 5.5pc to 1 to 2 per cent on import, he added.

The PM adviser said that the government has also halved the capital gain tax on the real estate sector, this would also increase economic activity as the government had already announced the package to the construction industry. The cement price to Rs15 per bag will also fall due to a decrease in sales tax up to Rs0.25.

He said that the FBR was collecting a big percentage of taxes on imports; however, this has been reduced due to rationalization policy as well as pandemic.

Replying to one question, the adviser said that the government has not announced the minimum wage because there is a time for everything. “We want to give relief to those people who do not have wages due to Covid-19.”

He also said that people will witness a decline in the CNG price, adding that the regulatory regime will also be strict against the companies if they violate the law.

Regarding the privatization matter, the advisor said that we have added 15 new companies in our privatization program. The privatization of two LNG based plants is in its final stage and we will implement our agenda. He deferred the question with regard to the PTCL privatization, he said “that we have given answers to PTCL many times. I will reply after the budget. “

He also said that Pakistan has a very good relationship with the IMF, the latter one approved $1.4bn from its board on the request of Pakistan to cope with the Covid-19 crisis. The lending organization has asked Pakistan to spend while keeping in mind the income, the adviser said, adding that the government must make decisions keeping the ground realities in mind, and in this budget, “we have made massive cuts in expenditures”.

The FBR chairperson said that the board has made amendments in the definition of NPOs and now the government has given one year to explain their source of income on the direction of FATF. “We will treat all of them on an equal basis despite the fact, they were availing tax exemptions.”

The member IR policy Dr Hamid Attique also said that the government had ended the Rs350bn exemption in last year and now Rs1100bn exemption is pending and this would be finished in the coming years.

Regarding the decrease in sales tax on mobile phones, Minister for Industries Hamzad Azhar said that we have also lowered the sales tax on mobile phones and this would be implemented through a supplementary budget. In addition to this, he also said that FBR will issue the SRO with regard to decreasing the regulatory duties (RD) not the finance bill.

Replying to one another question, the advisor said that we have purchased Rs280bn wheat from farmers. The agricultural sector will flourish once the farmers will get the money. “Our sole purpose is to continue the economic activities in this Covid-19 times as no one knows how long this pandemic will remain and the government cannot make any final decision with regard to the economy.