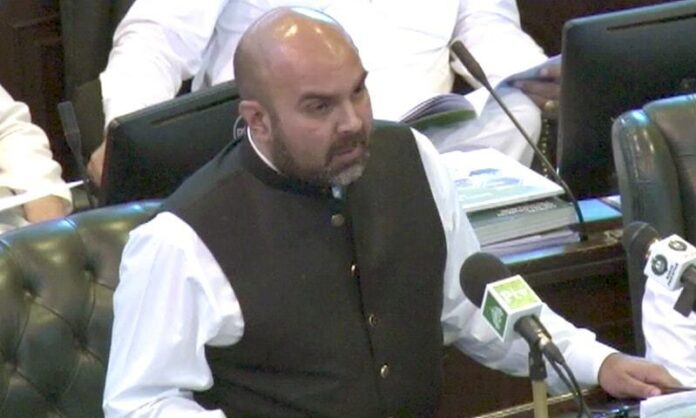 –Despite Covid-19 challenges, KP govt expects its income to surge by 20pc to Rs36bn in FY20

PESHAWAR: The Khyber Pakhtunkhwa government on Friday unveiled a “tax-free” budget for the financial year 2020-21, with a total outlay of Rs923 billion.

Of the total amount, Rs184 billion have been allocated for the merged areas of erstwhile FATA in order to bring the neglected area at par with developed districts of the province.

Presenting the provincial budget for FY21 in the KP Assembly, Finance Minister Taimur Saleem Jhagra said that the total outlay of the budget was pitched at Rs923 billion, including Rs739.1 billion for settled districts and Rs183.9 billion for merged districts.

He informed that the provincial government has earmarked Rs317.8 billion for Annual Development Programme (ADP) 2020-21, including Rs221.9 billion for settled areas and Rs95.9 billion for merged tribal districts.

“A record sum of Rs124 billion has been allocated for the provincial health sector,” Jhagra stated, adding that the health budget for settled districts has increased from Rs87 billion in the outgoing fiscal to Rs105.9 billion in the upcoming fiscal year.

Of the total health budget, he said Rs24.4 billion have been allocated for development purposes, including Rs13.8 billion for settled and Rs10.6 for merged districts.

“The government will utilise all resources to ensure adequate stock of equipment, medicines and availability of doctors in public sector hospitals. Sehat Insaf Cards will be provided to every family of the province and in this regard, Rs10 billion have been reserved in budget FY21.”

He said Rs36 billion have been earmarked for Medical Teaching Institutions (MTI hospitals), including Rs26 billion under the current budget, Rs4 billion for completion of key projects, and Rs6 billion under ‘special demand funds’ for improvement in the healthcare system of major hospitals.

“Shortage of infrastructure and equipment in basic health units will be overcome [in FY21] and for this purpose, a project worth Rs13 billion would be launched in collaboration with the World Bank,” he added.

Similarly, the minister said, the budget for procurement of medicines has been increased from Rs2.5 billion to Rs4 billion, while Rs1 billion have been earmarked to acquire private sector services to manage hospital waste.

He also announced Rs24 billion for an anti-coronavirus emergency programme under the next fiscal year.

For erstwhile FATA, the provincial government has allocated Rs1.5 billion while it would also seek foreign loans to develop the farming techniques in merged districts.

The KP finance minister said that the budget was free from taxes, as the existing taxes won’t be enhanced while no new taxes would be introduced in FY21.

“Despite Covid-19 challenges, the total income of the province has been estimated at Rs36 billion for the ongoing fiscal, which is 20pc more than last year. Had the pandemic not surfaced, the total income would have crossed Rs45 billion.”

He said the private sector was being involved for solid waste management purposes, adding that the government has reduced sales taxes on 27 proposed items.

He added Rs901million would be disbursed to 3929 beneficiaries of Insaf Rozagar Scheme.

“A robust measure for the expansion of new functions and services to the merged areas, including expansion and strengthening of judiciary, policing, local government, and social services has been taken. This includes the creation of 18,000 posts in different sectors during the current financial year 2019-20.”

For the 24/7 operation at Torkham border, he informed the KP government has allocated Rs26 billion to increase exports and Rs3.5 billion to manage import duties. The budget also highlights an allocation of Rs77 billion to boost trade, economic growth, and creation of 60,000 to 100,000 jobs.

The minister said the KP government has allocated three per cent of NFC share as additional resources in line with the commitment of the federal government at the time of the merger.

He said the KP Revenue Authority(KPRA) has yielded results as the income has been enhanced from Rs10 billion to Rs17 billion.

To restore the economy and generate employment opportunities, he said, a loan scheme for 10,000 SMEs would be launched to facilitate over one million people, adding interest-free loans to 30,000 to business entrepreneurs would benefit 0.5 million people.

He said 25,000 additional recruitments would be made to plant 190.5 million saplings under the billion trees project and resources would be provided for the establishment of marble city in Buner district.

The government also earmarked for Rs30.2 billion for primary and secondary education.