Despite an attack on PSX building earlier in the day, the index managed to accumulate decent gains to surpass the 34,000-mark 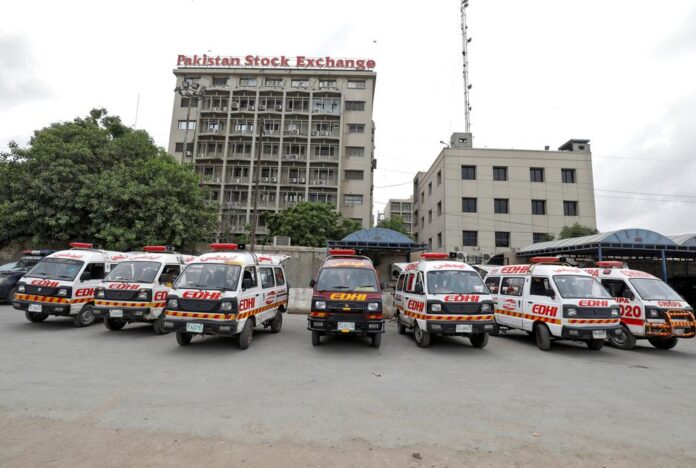 KARACHI: Indices of the Pakistan Stock Exchange (PSX) showed incredible resilience on Monday, withstanding a terrorist attack on the PSX building earlier in the day, besides accumulating decent gains to cross the 34,000-mark.

The Baloch Liberation Army had taken responsibility for the act of terrorism.

“Trading did not stop for a minute and is still ongoing,” said PSX Managing Director Farrukh Khan while talking to a private media channel soon after the attack. “The PSX is an economic symbol…its security is important and should be strengthened.”

A general consensus among market analysts is that the index recovered due to the “quick response by law enforcement agencies at controlling the situation”.

Naushad Chamdia, CEO of Standard Capital Securities, commented, “The index may have recovered in solidarity against the enemies of Pakistan. However, the market sentiments looked good because of the reduction in interest rate.”

Capital Stake Director Research Maha Jafer Butt noted, “Investors defied Monday’s foiled terrorist attack on the exchange. PSX had also remained resilient against such attacks in the past when the country was fighting the war against terror.”

Arsalan Soomro, Managing Director at Khadim Ali Shah Bukhari Securities, explained, “It was a follow-up rally after interest rate cuts and reduction in federal excise duty on cement. The valuations were quite good, regardless.”

Commenting on the foiled terrorist attack, he stated, “It was a targeted attack at the heart of the investors, both local and foreign. Given the nature of arms and ammunition with the terrorists, the security forces must be appreciated for foiling what could have been a major catastrophe.”

Speaking to Profit, Samiullah Tariq, Head of Research & Development at Pak Kuwait Investment Company, said, “The recovery could be attributed to the expectation of budget approval which is linked to the IMF review. This could also be due to lower FED on cement.”

In a tweet, Mohammad Sohail, CEO of Topline Securities wrote, “Failed attack at PSX. Trading is smooth and continuing. PSX benchmark index one of the Best Performers in Asia today so far. This is the resilience of Pakistan.”

“Historically speaking, after terrorist events, markets do plunge because of fear but with the swift actions of the security forces, the situation was brought under control which ended the uncertainty and allowed investor confidence to return,” Luqman Nadeem, Chief Investment Officer at FlatRock Associates, opined.

The oil and marketing sector emerged as the biggest gainer of the session, adding 4.69pc to its total market capitalization.

Meanwhile, Prime Minister Imran Khan has condemned the terrorist attack on the PSX. “The nation is proud of the LEAs for courageously taking on the terrorists and foiling their plans.”

In addition, the PM extended his condolences to the families of the martyrs and prayed for the recovery of the injured.