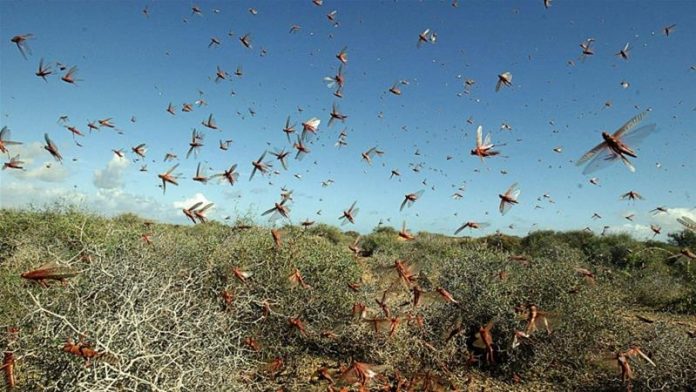 ISLAMABAD: The government is going to initiate a bio-compost project aimed at controlling locust, in Cholistan and Thar.

The pilot project of developing bio-compost to use the millions of locusts and promote organic farming in the country is in the approval process.

According to officials of Ministry of Food Security and Research, the pilot testing of the project will initially be carried out in Cholistan and Thar, and if 10 per cent of the population in the two areas becomes active, the Ministry of National Food Security and Research expects that a force of 222,000 people in local community would be available to combat the attack of desert locusts.

The ministry expects that the project will result in protection of biodiversity and full mobilisation of the local community to develop a well-informed system to protect 23.6 million hectares of cropped area.

The economic benefit of the project will be the introduction of low cost – 60 to 70 per cent lower – compost and expected return will be around Rs2.80 billion in two years, according to the ministry.

It will also result in improving soil organic matter (SOM), soil fertility and soil health. The locust-based fertiliser will have added advantage of more N (9 per cent) and P (7 per cent). Initially locust will be unruffled through community mobilisation under an incentivised scheme.

The ministry says that the facility developed for compost production will be functional with or without locust components in the long run, and it has been estimated that Rs1 billion worth of compost will be produced during the first year of the project.

If 1 per cent of crop loss is controlled under the project, it will accrue the benefit of Rs32 billion.  Out of 100,000 tons of locust, 70,000 tons compost will be formed. A single family can earn Rs6,000 on average per month. The full cost of the project will be recovered in three years.

A four-point implementation mechanism has been devised, under which pilot testing of the project will be carried out in Cholistan and Thar deserts during next three to four summer breeding months.

According to the ministry, payment to the community will be channelized through the ‘Ehsaas’ programme at the designated collection points.

This will help develop standard compost from a mix of locust and other bio-waste material. Marketing and distribution mechanisms for promoting the use of compost in high value and organic agriculture will also be developed.

An amount of Rs2.5 billion will be spent for community-based locust eradication as proposed by the National Locust Control Centre under the plan. It is stated in the plan that community involvement is inevitable where both human and animal settlements are present in Tharparkar, Nara, lower and upper Thal and Cholistan.

The research establishments of Pakistan Agricultural Research Council at Bahawalpur, Umerkot and Dera Ismail Khan will be involved in implementation of the project. The Kharan Dryland Centre and agriculture research institutes of PARC at Turbat, Lasbela and Khuzdar will also be involved in the execution of the project.  The laboratories of the land resources research institute and the Ecotoxicology Programme of PARC will provide scientific backup for the production of standard compost.

It has been planned that 14 processing sites will be identified in Tharparkar, Cholistan, Turbat and Lakki Marwat. Around 50 per cent locust, 35 percent manure, and 15 per cent plant residue will be used to produce compost with standard ratio.

PARC Agrotech Company (PATCO) in partnership with the private sector will perform labelling, packaging, promotion; marketing and branding functions at national level. The certified compost products will be promoted for export purposes.