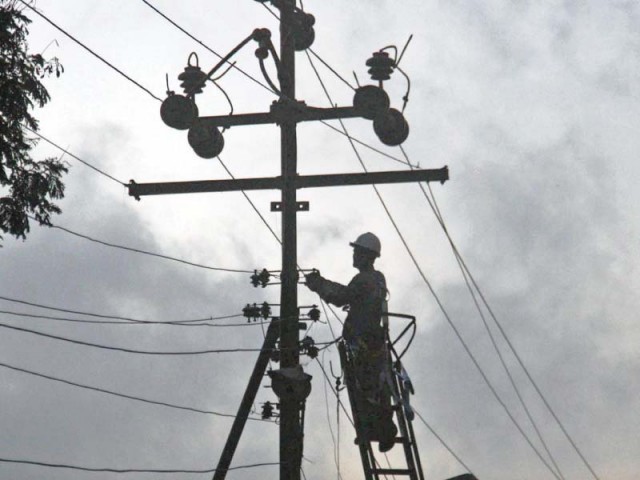 He instead blamed the federal government for delaying the approval for import of oil.

A public hearing to discuss the longstanding load shedding issues in Karachi, which have taken a turn for the worse this year, was held by the National Electric Power Regulatory Authority (NEPRA) in Islamabad on Friday.

A number of public representatives, technical experts, representatives of different entities, members of the business community, journalists and the consumers of Karachi participated.

NEPRA Chairman Tauseef H Farooqui presided over the hearing and members of NEPRA from all four provinces also participated.

“We have gathered here today to discuss the issue of load shedding in Karachi,” said NEPRA Vice-Chairman Saifullah Chatha. “The authority will listen to all stakeholders present today.”

Alvi said that Pakistan State Oil (PSO) had written to the federal government saying that the demand for furnace oil will not be met and had sought permission to import oil.

He said that KE’s plants ran out of oil and not only KE, but the government’s thermal power plants also faced supply shortages.

“PSO got permission to import oil for KE’s power plants after much delay,” Alvi said.

The KE chief said that due to increased demand for electricity in the summer, load shedding has to be done even in areas that are otherwise exempted.

“Our request for additional power from the national grid is never considered,” he complained.

Alvi said that currently, KE takes 720MW to 730MW from the national grid.

Chairman Farooqui, taking into account the statement by the KE chief, asked whether KE must be held responsible for Karachi’s electricity woes since June 22.

At this, the KE chief vehemently denied being responsible. “KE cannot be blamed for the current situation,” he said.

Farooqui said that KE should have foreseen the increase in demand and planned to meet the shortfall in advance.

The NEPRA chairman, during the hearing, also showed disapproval over the KE chief finance officer responding to customers’ queries instead of the chief executive during the video conference.

“Where is the CEO?” asked Farooqui, to which he was told that Alvi is away on a call with the power ministry.

“The CEO cannot get up and leave a court hearing,” remarked the NEPRA chairman, adding that the power utility has frequently been taken to court over various matters.

Imtiaz Sheikh, the power minister for Sindh, thanked the NEPRA chairman for conducting a public hearing.

“Karachi has a serious load shedding problem. NEPRA must come here and see for itself,” he said.

Sheikh said he doesn’t wish to assign blame to anyone and invited the federal government to also come down to the city so the issue can be resolved “once and for all”.

To this, Vice Chairman Chatha responded by saying that the authority will soon pay the city a visit.

“Will NEPRA end K-Electric’s monopoly in Karachi?” lawyers from Karachi asked the chairman.

“NEPRA wants to create a competitive environment in the power sector,” the NEPRA chairman assured them.

All Pakistan Textile Mills Association (APTMA) Executive Director Shahid Sattar said the industry is not being provided power and the gas has been cut off too. “Who will be responsible for the loss of the industry?” he asked.

The NEPRA chairman said the purpose of the hearing had been to gather all the facts and that a verdict will be issued at a later date.

According to a press release issued by NEPRA following the hearing, a four-member committee has been formed “to visit Karachi immediately, conduct further investigations on the ground and submit a detailed report to the authority before the end of next week”.

It shall be headed by Director General (Monitoring & Enforcement) and will comprise NEPRA professionals and experts.

Necessary action will then be taken based on the findings in the report.

On the other hand, KE, in a press statement issued in response to the NEPRA hearing, reiterated that the current load-management has been the result of fuel shortfall which has compromised generation capacity at K-Electric’s 1,250 Megawatt (MW) Bin Qasim Power Plant as well as at its Independent Power Producers (IPPs) including Tapal.

“The current situation has been further aggravated due to demand surges on account of high temperatures and humidity as well as erratic power supplies from the Wind Corridor and suspension of supplies from KANUPP. This current situation is unprecedented and in an effort to provide relief to its residential customers during the late-night hours, KE has been managing load through industrial load-shedding despite it having a negative impact on the company’s financial health and profitability,” the company’s statement read.

The statement further said that KE operates in a regulated environment where timely approvals from government and regulatory bodies are necessary to materialise both operational and long-term business plans necessary to meet Karachi’s growing power demand.

KE said that it had anticipated the growing supply-demand shortfall as far back as FY16, and had developed a robust $4 billion investment plan which included several generation initiatives including a 700 MW coal-fired power plant as well as downstream transmission and distribution upgrades.

“While KE received approvals for its 900 MW RLNG power plant in FY19, of which phase one is expected to come on-stream by May 2021, with a resultant improvement in Karachi’s power supply situation, approval for the 700 MW coal project is still awaited. The company has been highlighting to all concerned authorities that approval delays will negatively impact KE’s ability to meet the city’s long-term power demand growth and widen the supply demand gap,” the company’s statement said.

“Considering that many governmental and regulatory entities have a role to play in providing a climate that encourages and expedites investments, KE should be accountable only to the extent of its role as a power supplier and other players must also share responsibility for delayed decision-making.”

The company further stated that since 2009 it has invested over $2.4 billion in power infrastructure upgrades and additions which reduced transmission and distribution losses by over 17 per cent, resulting in load-shedding exemption for over 70 per cent of Karachi including all industrial zones.

KE further stressed that the company remains committed to providing power supply to Karachi and that it has initiated work on building the required interconnections following the Cabinet Committee on Energy’s (CCOE) approval last month to supply 1,400 MW additional electricity through the National Grid to KE.