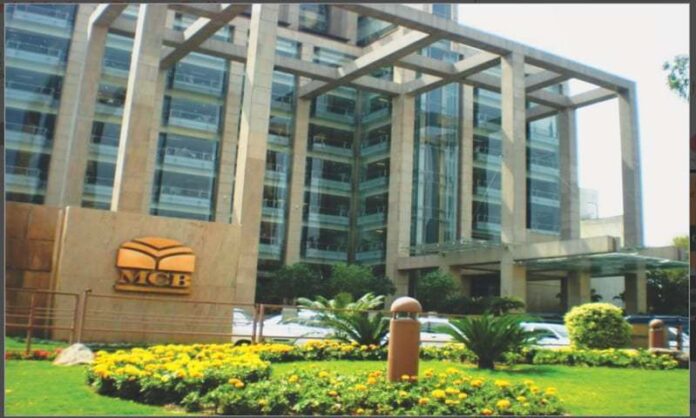 LAHORE: The Board of Directors of MCB Bank Ltd (MCB) met on Thursday to review the bank’s performance and announce its financial statements for the half-year ended June 30, 2020.

According to the financials, the bank’s unconsolidated profit after tax increased to Rs13.2 billion in the half-year ending June 2020, as compared to the Rs10.67 billion in the corresponding period last year, showing a growth of 24pc year-on-year.

The bank’s earnings per share (EPS) clocked in at Rs11.15, which is an increase from the Rs9.01 during the same period last year.

In compliance with the SBP’s instructions, the bank has not declared a dividend for the second half ended June 30, 2020.

The bank’s net interest income for the first six months of 2020 increased by 30pc over the first half of 2019, to Rs36 billion, on the back of volume growth and 69 basis points increase in net interest margin.

On the operating expenses side, the bank reported a net decrease of Rs138 million compared to last year, with the cost to income ratio improving to 38pc in this half from 46.1pc last year.

The bank suffered from higher than expected provisioning costs of Rs3.9 billion in the second half of the calendar year 2020, which was a significant increase from the Rs759 million recorded in the second quarter last year. This was considered lower than analysts’ expectations.

According to the bank, the full potential effect of the economic stress posed by the Covid-19 outbreak remained difficult to predict, so management had booked a general provision of Rs4 billion to provide insulation against any unexpected rise in non-performing loans.

The coverage and infection ratios of the bank were reported at 94pc and 9.91pc, respectively.

Meanwhile, the deposit base of the bank increased by Rs129.9 billion (or a rise of 11pc) over December 2019, with over 50pc of the growth in current accounts.

Additionally, the bank’s total capital adequacy ratio is 20.51pc, which the bank stressed was higher than the typical requirement of 11.5pc. The bank also highlighted that its leverage ratio of 6.72pc was above the regulatory limit of 3pc.