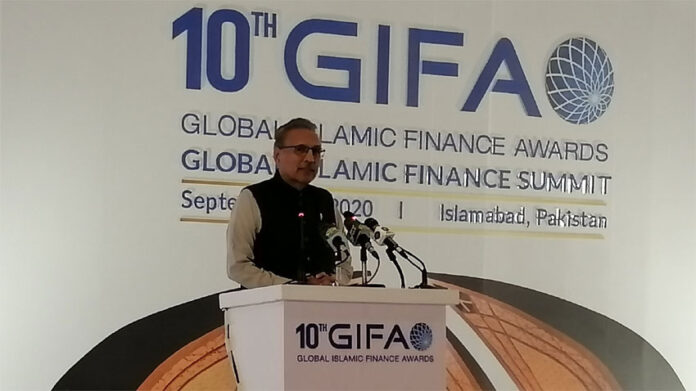 ISLAMABAD: Pakistan has been awarded with the ‘Global Islamic Leadership Award’ in recognition of its efforts towards promotion of Islamic financing. The award was received by President Dr Arif Alvi on Monday.

Addressing the 10th Global Islamic Finance Awards (GIFA) ceremony, President Dr Arif Alvi noted that Islamic financing was increasing around the world, but its full potential was yet to be explored.

He said that Islamic finance contributed $2.7 trillion globally, which was comparatively much less than conventional banking. He appreciated the fact that 17pc of Pakistan’s banking sector has turned to the Shariah-compliant instruments.

“A Sukuk bond was recently floated in the energy sector to arrest circular debt.”

President Alvi commended the role played by State Bank of Pakistan (SBP) and Securities & Exchange Commission of Pakistan (SECP) for promotion of Islamic banking. He emphasized the need to adopt the basic principles of Islamic financing to help establish a society based on equality and compassion.

The president further stressed the need to raise public awareness about Islamic financing, particularly the spirit leading towards its positive impact on society due to a far bigger scope than just being limited to money lending.

He said the coronavirus pandemic posed financial problems worldwide that required adaptations in systems accordingly. He mentioned that Ehsaas programme launched by the government provided financial assistance to the people during difficult economic situations.

Dr Alvi regretted that the world over, morality suffering at the hands of economic interests and mentioned the response of the United Nations on several important issues based on the same approach. He urged multi-national companies to think about the notion that profit-making should not be a lone factor in dealings, but welfare of consumers and employees as well.

He mentioned measures adopted by the government in the domain of Islamic finance including representation of three Islamic schools of thought in Shariah Advisory Committee for an inclusive approach, setting up of Shariah boards at banks and mandatory Shariah audit.

Speaking on the occasion, GIFA Founding Chairman Dr Hamayun Dar highlighted the salient features of the awards with its role to promote, regulate and supervise the Islamic banking and finance the world over.

Later, President Alvi gave away awards to banks working in Islamic finance for their significant performance in related fields.