Can service sector exports save Pakistan’s economy, it just might 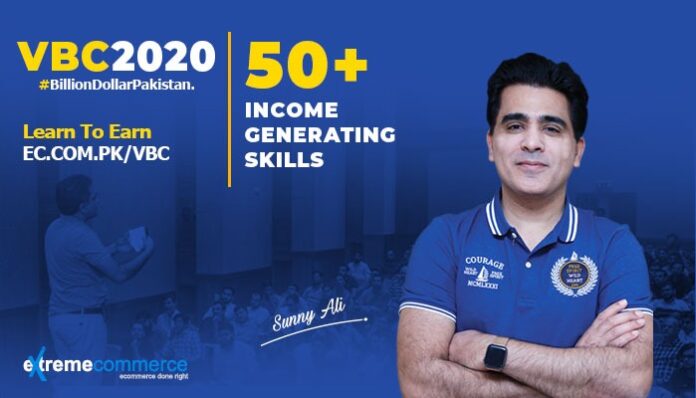 In August, Extreme Commerce, a Pakistani skill-based learning platform, announced that it will be launching its new and improved Video Boot Camp (VBC) 2020 which will help Pakistanis earn up to $1,000 each month through service exports. Extreme Commerce claims that the new VBC will allow people to have access to at least 50+ skills that will enable them to export services and products to earn a living in Pakistan.

Now considering Pakistan’s economic situation and the current wage levels as well as the Dollar-Rupee parity, $1,000 each month is a lot more than the current average wage, but that is not all that Extreme Commerce promises. The company which started in 2017 boasts another very ambitious vision of bringing in $1 billion as foreign income into Pakistan by the year 2025 under its ‘Billion Dollar Pakistan – 2025’ banner. This all might sound like a fairy tale but Extreme Commerce’s CEO Sunny Ali says he has a plan.

As the company’s name suggests, ecommerce is at the heart of all that Extreme Commerce does, especially international ecommerce on platforms such as Amazon, eBay and Etsy. Sunny Ali says, “Pakistan’s ecommerce market is worth around a billion dollars, meanwhile United States’ market is estimated at around $550 billion and is consistently growing. It just makes more sense to sell internationally and bring the money back into Pakistan’s ecosystem. Moreover, international markets provide more opportunities for wealth creation than Pakistan.”

Sunny Ali and his team are strong advocates of wealth creation. He argues that the Pakistani mindset is too geared towards simply living each day and not really equipping people to create wealth. He says that Pakistanis as a nation are too fixated on the employee mindset that they often overlook the countless opportunities presented to them. But he also argues that it is not their own fault, it is the system that they grow up in. He and his team aim to break this very mindset and set people up for wealth creation through digital assets.

But how does all this help Pakistan? Official experts in Pakistan have worked out that pandemic losses can reach up to Rs2.5 trillion. They also believe that employment loss could be up to 12 million, around 20 per cent of the employed labour force of the country. The total labour force in the country stands at 60-65 million and moderate estimates calculated by the Pakistan Institute of Development Economics (PIDE), an affiliate of Planning Commission, showed that the pandemic affects could result into unemployment fluctuating from 12 to 20 million.

On the trade side, the Planning Commission’s estimates showed that there was an expected sharp slowdown in imports of up to 60 percent, exports could potentially go down by up to 10 percent “Impact of trade contraction only on GDP could be up to 4.6 percent in the last quarter if combined imports and exports go down by 20 percent,” the official estimates showed.

Extreme Commerce wants to seize this moment to provide new opportunities for the people of Pakistan and improve the economy of the nation by enabling people to export services. And in order to do so the company is not only equipping people through the new VBC but is also offering financial help when it comes to paying for the platform. Currently, around 13,000 people have free or discounted access to the VBC platform. The company and its management believes that this will create thousands of opportunities for Pakistanis both in Pakistan and abroad.

Sunny Ali further explained that bringing in a billion-dollar annually into Pakistan might very well be a daunting task but it is not impossible. He said, “We want to enable people to earn a decent minimum living wage, and we are providing them with the exact skills and the tools to do so.” He added, “Our goal is to equip 10,000 people over the next 5 years to become sellers on international platforms such as Amazon and as for the others, they can provide their services within international markets.”

To further their vision in equipping Pakistan and boosting service sector exports Sunny Ali in a tweet announced that they will offer the VBC 2020 to all school, college and university students across Pakistan.

Extreme commerce’s video boot camp (VBC) not only caters to international online market place specific opportunities but offers a range of trainings related to e-commerce that Pakistanis can learn and provide services to clients, both locally and internationally. Moreover, members can access Extreme Commerce’s online community which consists of around 250,000 people and consistently growing. This community serves not only as an additional learning platform but also acts as a place for students to interact with potential clients and investors – creating a win-win situation for the clients and investors as well as the students.

The SBP has rejected unsubstantiated claims that they were about to pledge their gold reserves, but is that even an option?
Read more
FEATURED

SUVs are replacing sedans as the automobile of choice in Pakistan, but will new entrants be able to defend the segment they created against a resurgent Big 3?
Read more
- Advertisement -