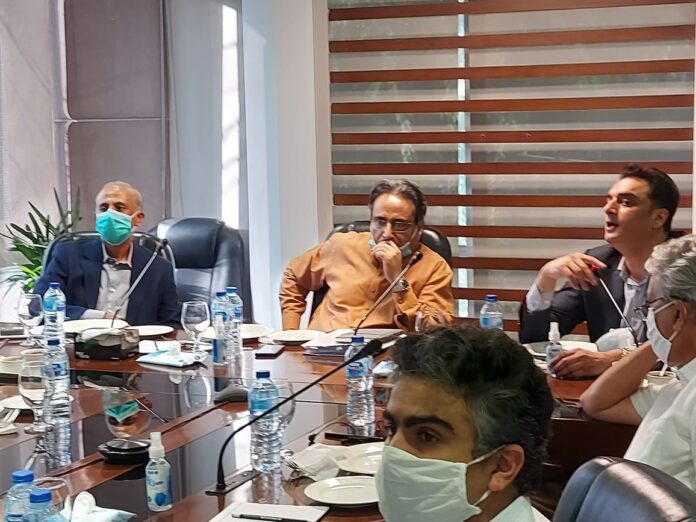 LAHORE: Special Assistant to Prime Minister (SAPM) on Petroleum, Nadeem Babar, said on Saturday that the Federal government is committed to making the textile industry competitive, and helping it realise its full export potential.

The SAPM made his comments speaking to the media at the Punjab office of the All Pakistan Textile Manufacturers Association (APTMA), where he was on a visit to hear and understand the problems that the textile industry was facing.

He said his meeting with the APTMA leadership and members was very constructive on the issue of Gas Infrastructure Development Cess (GIDC), and that the government would ensure maximum relief to the industry within the ambit of the verdict of the apex court.

According to him, the textile industry is looking for a stable textile policy and the government is committed to bring it at the earliest to enable the industry to begin in foreign exchange, create jobs and new investment in the country.

He said the government would ensure supply of gas to the industry during the winter season. SAPM also congratulated Adil Bashir for his unopposed election as central Chairman APTMA and expressed the hope that he would serve the industry out of his best abilities.

Speaking on the occasion, Adil Bashir said he would continue to serve the textile industry with the same passion as he has been serving as Chairman APTMA Punjab over the last two years.

He said the textile industry has been revived fully due to the export-friendly policies of the government. The idle capacity has become operational and the textile exports have started picking up over the last two months. The exports are also showing 14% increase during the ongoing month of September, he added.

Earlier, in his presentation to SAPM Nadeem Babar, Chairman APTMA Chairman Adil Bashir said realistic energy efficiency benchmarks should be re-fixed in consultation with the industry, experts and technical data. Also, he said, the energy audit may be suspended till re-determination of efficiency benchmarks.

The industries using gas for in-house consumption should not be charged GIDC at captive tariff. Since the textile industry has not passed on the incidence of GIDC, therefore, arrears of GIDC should not be recovered from the textile sector till decision by Superior Courts, he stressed.

According to him, SNGPL has issued GIDC arrears bills at captive connection tariff without determining passing of incidence. The Lahore High Court vide order dated 14-09-2020 has stayed recovery of arrears prior to 2015 and difference of industrial and captive tariff.

He said the textile sector has not passed on incidence of GIDC to consumers. Hence Supreme Court decision not applicable to textile sector. GIDC arrears recovery may be suspended till final outcome of Review Petition.

He demanded the fixation of all inclusive energy tariffs i.e. electricity @ 7.5C/kWh and gas at US$ 6.5/MMBTU for next five years. He further said that a billing mechanism should be devised for disbursement of subsidy to SNGPL for providing gas to 5 export oriented sectors at US$ 6.5/mmBTU.

Subsidy for all the surcharges and costs above US$ 6.5/mmBTU for the period Oct 2018 – July 2020 should be released to SNGPL, he added. He has also urged the visiting SAPM to include new electricity/gas connections of industry not previously listed in erstwhile zero rated.

He said the government had announced in October, 2018 an all inclusive energy package for 5 export oriented sectors announced with electricity at 7.5C/kWh and gas at US 6.5/MMBTU. This package enabled the industry in Punjab to compete with domestic and regional competitors, he added.