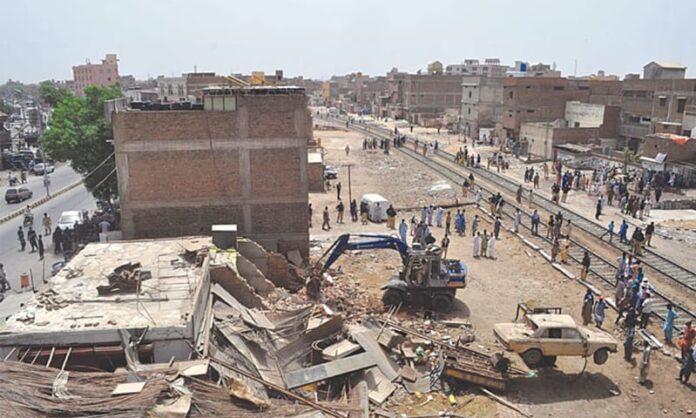 ISLAMABAD: The Supreme Court (SC) on Thursday directed Pakistan Railways to retrieve its land along the Karachi Circular Railway (KCR) and demolish encroachments on the track.

The court was hearing a case pertaining to the revival of the KCR.

During the hearing, the counsel for Railways informed the court the department has submitted its report over the matter. At this, Chief Justice Gulzar Ahmed said that the photographs included in the report do not paint a complete picture, observing the pictures showed encroachments on state-owned land.

“How the train will run when the land adjacent to track has been under encroachment,” the top judge remarked.

“The path for running a train has been cleared,” Railways chief executive officer told the court.

“Talk as a responsible officer,” the judge retorted. “Don’t you think the encroached land belongs to Railways,” he asked.

Expressing dismay over the failure of the department to provide any proper update about the project to revive the KCR, the court ordered its officials to demolish all encroachments on its land.

The top court in February directed the Pakistan Railways and Sindh government authorities to carry out the operation for removal of encroachments from all the lands meant for the long-delayed KCR to start its operations within six months.

Last month, during a hearing, the railways secretary informed the court that the track had “almost” been cleared of encroachments. The court however expressed disappointment, saying the time granted by the court was over, but the KCR had not yet been revived.

The KCR which was commissioned in 1964, originally to help employees of the Pakistan Railways travel between their jobs, the service became a full circle of 44km in 1970 and connected Karachi’s four main work areas: the port, the Sindh Industrial Trading Estate (SITE), the city’s central commercial areas such as Saddar and the Landhi Industrial Area.

The KCR remained the public transport of choice for the people of Karachi till 1984 when the number of its trains was reduced.