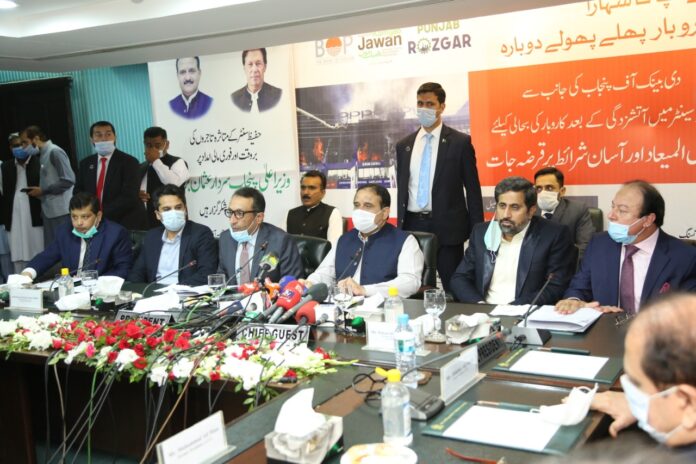 The announcement was made by the CM at the Lahore Chamber of Commerce and Industry (LCCI), where he also took notice of the fire affectees’ plight.

“The Bank of Punjab (BOP) will provide soft loans to the fire victims and for this purpose, a special desk of the bank has been established near Hafeez Centre,” the CM said. “The BOP will provide finance solutions at affordable rates under Kamyab Jawan Progamme/Punjab Rozgar Scheme and BOP Apni Dokan.”

He noted that the Federal Board of Revenue (FBR) has already announced disbursement of refunds to the Hafeez Centre fire victims on a priority basis.

Buzdar said the BOP has also offered the traders 135 shops (owned by the bank) at its IT Tower (Lahore) on affordable terms.

“In order to further the business activity in Punjab, the government has planned to establish 13 Special Economic Zones (SEZs) across the province; work on SEZs in Faisalabad and Lahore has commenced, while SEZs in Bahawalpur and Muzaffargarh will be announced soon.”

Misbah also highlighted some of the longstanding issues of the business community that required immediate attention of the government.

“We fully support the measures to strengthen the price control mechanism but this should be done in just manner,” he said, adding that LCCI must get a fair representation in district committees for timely resolution of administration-related issues.

The LCCI president said in order to resolve development-related issues in Lahore, a joint high-powered committee should be constituted which may include four representatives of private sector nominated by LCCI in addition to representatives of relevant government departments.

He emphasized the dire need of new parking plazas in Lahore due to the growing needs of the city. “We are ready to work with Punjab government in this regard.”

Misbah informed that encroachments have badly affected the commercial areas of the provincial capital. These areas should be made free from encroachments, as they added to the cost of doing business.

The LCCI president said that safe city surveillance should be extended to all markets of Lahore along with measures to control street crimes. He said the high rate of conversion fee (20pc of commercial value) for land use charged by LDA was an impediment to industrialization and should be abolished.

Misbah said the water tariff of WASA-Lahore for industrial and commercial users (Rs100,000 for one cusec and Rs50,000 for ½ cusec) was extremely high as compared to other cities of Punjab like Faisalabad and Multan etc. LCCI recommended the government a uniform rate across all cities.

The chamber president appreciated the government for providing a relief package to the shopkeepers of Hafeez Centre. “We propose that they should also be given relief in provincial taxes,” he added.