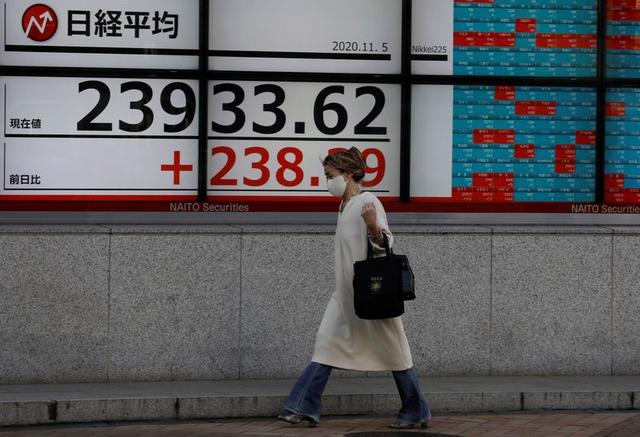 The MSCI World Index of global shares rose 0.4% to 608.98 points, just shy of the record high hit briefly earlier in the month, helped by strong overnight gains in Asia’s leading markets and a stronger open for most European bourses.

MSCI’s broadest index of Asia-Pacific shares outside Japan .MIAPJ0000PUS hit its highest level since launching in 1987 as Japan pulled out of recession, China posted better-than-expected industrial output data and the region signed the largest ever trade deal.

Taking their lead, European indices also rose with Britain’s FTSE 100 .FTSE and the pan-Europe STOXX Europe 600 .STOXX both up around 0.7%.

“With the futures pencilling in a 300 point rise, the Dow is set to start the week at 29,770, finally making good on the all-time high intraday levels struck this time last week,” said Connor Campbell, financial analyst at Spreadex.

The prospect of economic recovery also helped oil prices strengthen, with both Brent crude futures LCOc1 and West Texas Intermediate up around 1%.

Amid all the optimism, European government bond yields also fell back with Italian benchmark 10-year yields down 3 basis points.

Not every asset was swept up by the rising tide, however, with the dollar down slightly against a basket of currencies =USD, weighed by fresh data over the weekend showing an increase in the number of COVID-19 cases.

While rising cases of the coronavirus were a risk, Morgan Stanley strategists urged investors to “keep the faith” in their 2021 outlook note.

“We think this global recovery is sustainable, synchronous and supported by policy, following much of the ‘normal’ post-recession playbook. Overweight equities and credit against cash and government bonds, and sell dollars.”

For stocks, the analysts see earnings-per-share growth of between 25% and 30% across regions, with double-digit total returns through the end of 2021 that should helped power the S&P 500 to 3,900 points from its current 3,585 points.

The announcement, a week ago, that Pfizer PFE.N had developed a very effective vaccine has investors hoping for similar good news soon from rival Moderna MRNA.O and looking past a tough winter to a better spring and summer ahead.

Besides the virus, Brexit trade talks are chief among European investors’ concerns on Monday and hopes for a breakthrough have supported sterling against the dollar and the euro.

The British pound edged higher against the dollar GBP=D3, changing hands at 1.3219 per dollar, and against the common currency as well, and last stood at 89.75 pence per euro EURGBP=D3.

The departure of hardline adviser Dominic Cummings from Downing Street is seen as a positive, perhaps allowing more British concessions, but chief negotiator David Frost said on Twitter that talks “may not succeed”.

A slew of U.S. Federal Reserve speakers are also up this week, beginning with Vice Chair Richard Clarida at 1900 GMT.

U.S. bonds, which had sold off strongly on vaccine news last week, were again slightly lower, with the yield on benchmark U.S. 10-year debt US10YT=RR at 0.8832%.