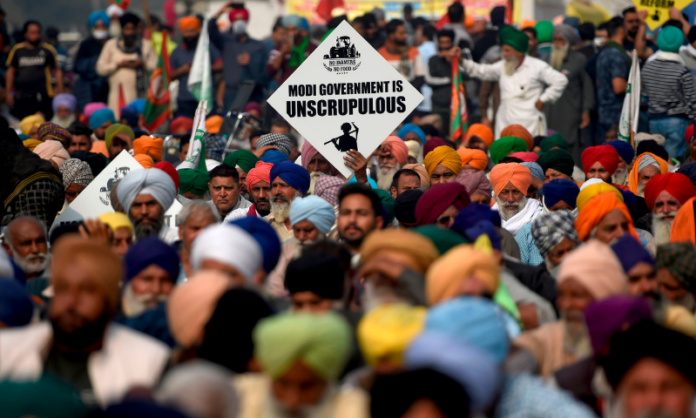 NEW DELHI: Thousands of Indian farmers angered by farm laws that they say threaten their livelihoods have intensified their protests by blocking highways and camping out on the outskirts of the capital Delhi.

The government of Prime Minister Narendra Modi and leaders of protesting farmers’ unions have held several rounds of talks but have not made any progress in breaking the deadlock over the set of laws passed by parliament in September.

Although various farmer unions have supported the protest, the agitation is largely led by the growers of relatively well-off states of Punjab and Haryana in India’s north.

Every year the Indian government spends billions of dollars on buying millions of tonnes of rice and wheat from Punjab and Haryana, and the world’s most expensive food procurement programme has now become the centrepiece of India’s biggest farmers’ protest in years.

HOW DOES INDIA RUN ITS MAMMOTH FOOD PROCUREMENT PROGRAMME?

After calculating the cost of cultivation, the state-run Commission for Agricultural Costs and Prices (CACP) announces Minimum Support Prices (MSPs) for more than 22 commodities yearly to set a benchmark.

Although every year the CACP announces MSPs for most crops, the Food Corporation of India (FCI), the main state-run grain procurement agency, buys only rice and wheat at those prices due to a lack of storage and funds.

After buying rice and wheat from farmers at MSPs, the FCI sells the staples at highly subsidised prices to the poor. The government compensates the FCI for its losses.

HAS STATE PROCUREMENT PROGRAMME LED TO OVERPRODUCTION OF RICE AND WHEAT?

Guaranteed prices offered by the FCI encourage farmers to produce large quantities of rice and wheat. Higher production puts pressure on the FCI to buy extra supplies from farmers, resulting in overflowing state warehouses and a ballooning subsidy bill that often pushes up the budget deficit.

Despite sitting on massive mounds of rice and wheat, the FCI finds it challenging to export as the annual rise in MSPs and its own storage costs make FCI’s rice and wheat more expensive than world prices, making overseas sales uneconomic.

Once in a while, the Indian government gives small quantities of rice and wheat to other countries through diplomatic deals. Still, FCI’s warehouses are chock-a-block.

The safety net ironically covers relatively well-off farmers from the northern states of Punjab and Haryana, forcing their poorer counterparts from Bihar and other underdeveloped states to sell at a discount.

Every year, farmers from Punjab and Haryana sell almost their entire produce to the FCI at MSPs thanks to well-developed market yards and efficient procurement centres, a far cry from Bihar’s underdeveloped grain procurement infrastructure.

Also, unlike poor farmers from Bihar, the rich and politically influential farming community of Punjab and Haryana ensures that the FCI continues to buy large volumes of rice and wheat from their states, where agriculture is a mainstay.

While Punjab and Haryana sell almost their entire rice and wheat output to FCI, the government agency’s procurement in Bihar has remained at less than 2% of the state’s total production.

Left out of the safety net, most farmers from Bihar are forced to sell at a discount of 25pc to 35pc.

Already deprived of assured returns, farmers from Bihar have not explicitly opposed the new laws which growers from Punjab and Haryana fear will eventually pave the way for the FCI to stop buying their grain at guaranteed prices, leaving them at the mercy of private buyers.