‘On a knife edge’: Britain and EU in last-ditch trade talks 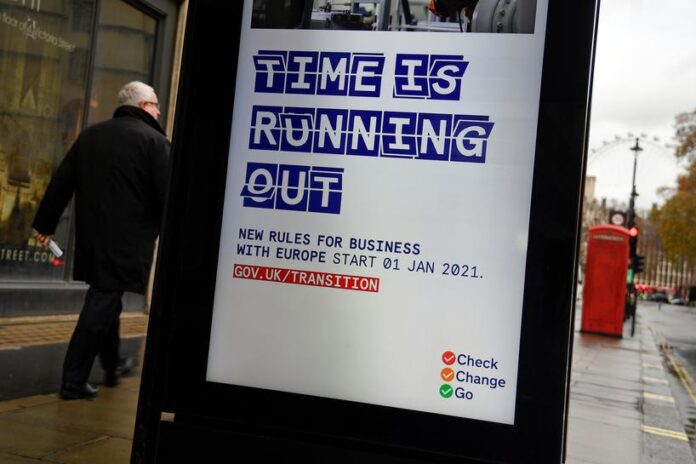 LONDON/DUBLIN: Britain and the European Union will make a last-ditch attempt to strike a post-Brexit trade deal this week, with probably just days left for negotiators to avert a chaotic parting of ways at the end of the year.

Ireland’s prime minister, whose country would face more economic pain than any of the other 26 EU member states in the case of a “no deal”, cautioned against over-optimism, putting the chances of an agreement at only 50-50.

British Prime Minister Boris Johnson and European Commission President Ursula von der Leyen spoke over the weekend to get their teams back to the negotiating table after talks stalled on three thorny issues.

They are due to hold another call on Monday evening in the hope that, by then, stubborn differences over fishing rights in UK waters, fair competition and ways to solve future disputes will have narrowed.

The Guardian newspaper reported after talks resumed on Sunday that there had been “a major breakthrough” on the rights of European fleets to fish in UK waters, leaving only a wrestle over how closely Britain should hew to EU environmental, social and labour standards over time to ensure a level playing field.

A British government source said there had been no breakthrough on fishing rights on Sunday.

EU officials did not immediately comment on the report.

“My sense, having spoken to some of the key principals here, is that it is a very challenging issue to resolve, particularly around the level playing field … Things are on a knife edge here and it is serious,” he told national broadcaster RTE.

Since Britain formally left the EU on Jan. 31, negotiators have missed several deadlines for a deal with the world’s largest trading bloc before a status quo transition period ends on Dec. 31.

EU negotiator Michel Barnier will brief EU countries’ ambassadors to Brussels on the state of play early on Monday and talks are expected to continue through the day ahead of another check-in by Johnson and von der Leyen.

If there is no deal, a five-year Brexit divorce will end messily just as Britain and its former EU partners grapple with the severe economic cost of the COVID-19 pandemic.

Mairead McGuinness, Ireland’s commissioner on the EU’s executive, said the next 48 hours were “very crucial”, but even if negotiators fail to reach an accord the two sides will still have to discuss their future relationship in the new year.

Even with a deal, there will be a major disruption to the movement of goods and people because from new year’s day Britain will sit outside the EU’s single market and customs union.

There will be more elaborate checks at borders, leading to delays in supplies affecting a range of industries, particularly those that rely on just-in-time deliveries.

The Observer newspaper reported that, under UK government contingency plans, tens of millions of COVID-19 vaccine doses could be flown from Belgium by military aircraft to avoid delays at ports caused by Brexit.

The British government declined to comment on the report, but farming minister George Eustice told Sky News the end of the UK’s transition period would not disrupt vaccine supplies.

“A huge amount of work has gone on to maintain the flow of goods at the border … and we’ve also got contingency plans in place, including a government-procured ferry that’s on standby and of course the option, should it be needed, to use air freight too,” he said.