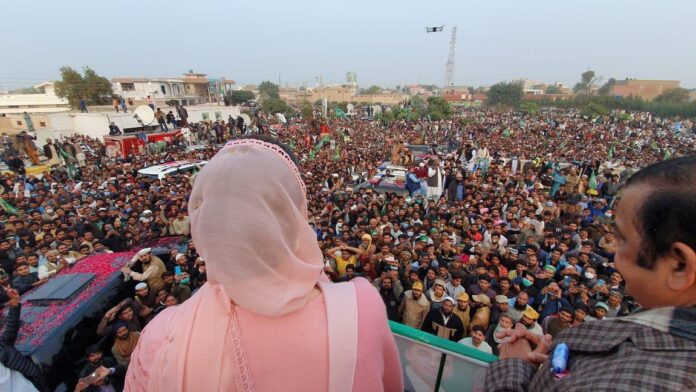 –Maryam Nawaz says unless Punjab stands up, things will not change

BAHAWALPUR: Kicking off the second phase of the Pakistan Democratic Movement (PDM) rallies, Pakistan Muslim League-Nawaz (PML-N) Vice President Maryam Nawaz took a card out of her father’s playbook and tried to rouse the people of Punjab to the opposition’s side.

After greeting an excited crowd of supporters on Sunday, the PML-N vice president said that Punjab would be “taunted” for “not standing up for others” and other provinces would say that “unless Punjab stands up, things will not change”.

“Well listen here! Not only has Punjab risen, it is ready to take back the rights it has been robbed of. And when Punjab stands up, whose legs start shaking?” she asked the chanting crowd.

“You know whose legs shake when Punjab rises? Establishment, selectors and selected all are watching that Punjab has risen,” she said.

This narrative is similar to the one taken by the Nawaz Sharif-led Islami Jamhoori Ittehad (IJI) in the 1980s, wherein Nawaz had adopted the slogan: ‘Jaag Punjabi jag, teri pagg noon lag gya daag’ (Awaken O Punjabi, your honour is at stake).

Maryam appears to have adopted a similarly divisive call to action to rouse people against the ruling party.

The PML-N VP rhetorically asked what would happen if she directed the crowd towards the federal capital. She said that the number of people in the crowd shows that the ruling party’s days are numbered.

“Bahawalpur has given its verdict; this government’s days are numbered. So should [we] keep sitting in these sham assemblies or resign?” she asked the crowd, who largely responded with chants of resignation.

However, the PDM has yet to make any formal announcements about handing in the resignations and have extended their deadline from December 31 to the end of this month.

The rally in Bwp is the hugest. By far the biggest I have seen, disparaging it, disregarding or dismissing it will only make the govt look foolish. The young,old, children were all drawn to hear @MaryamNSharuf roar it was extraordinary&surreal to watch!#MaryamNawazInBahawalpur pic.twitter.com/WPwA8LS6e9

“I feel your pain,” Maryam said to the people of Bahawalpur while counting the issues faced by the public due to the rising costs of electricity, gas, sugar, wheat, etc. She said that she could not speak of chicken when people could hardly afford vegetables.

“Will the people of Bahawalpur make ends meet to feed their families, to pay their children’s fees, to pay utilities or pay for the treatment of the elderly at home?”

Maryam said that it was because she understood the plight of the common man that she wanted to send Prime Minister Imran Khan packing, remarking that he had “after two-and-a-half years has thrown his hands in the air to declare he does not know how to run the country’s affairs”.

Taking a jibe at PM Imran, she asked if the “tabdeeli” he had promised was the “storm of inflation”.

She said that PM Imran often said that “the army knows [Imran] is not corrupt”, but counted out the way in which the prices had risen over the past few years.

“IMF has said electricity tariffs must be increased by 25 per cent,” she said and added that under the leadership of her father, former premier Nawaz Sharif, price of wheat was Rs35 which is now available at Rs90.

Maryam said that the day the lawmakers of the PDM resigned would be the final day of the government of PM Imran.

Furthermore, Maryam stated that no one from the incumbent government seems to be concerned about the Machh coal mine incident which took place earlier in the day. She also went on to lament the death of Usama Nadeem Satti, a 22-year-old student, by rogue cops of Counter-Terrorism Department (CTD).

Maryam threw accusations of corruption against the premier, stating that he takes a Rs250,000 salary, but runs a 300-kanal house. She also accused his sister, Aleema, of laundering money.

She claimed that PM Imran had used the National Accountability Bureau (NAB) to regularise his house, as well as helping his “friends” escape the anti-graft watchdog and flee abroad.

The PML-N leader said that “without installing a brick in the way of development”, the government has “doubled” the country’s debts.

“Now the army too will say you [PM Imran] have done corruption with a lot of honesty,” she added.

Furthermore, she used the example of PML-N Punjab President Rana Sanaullah, who was on stage with her, to highlight PM Imran’s “incompetence”. 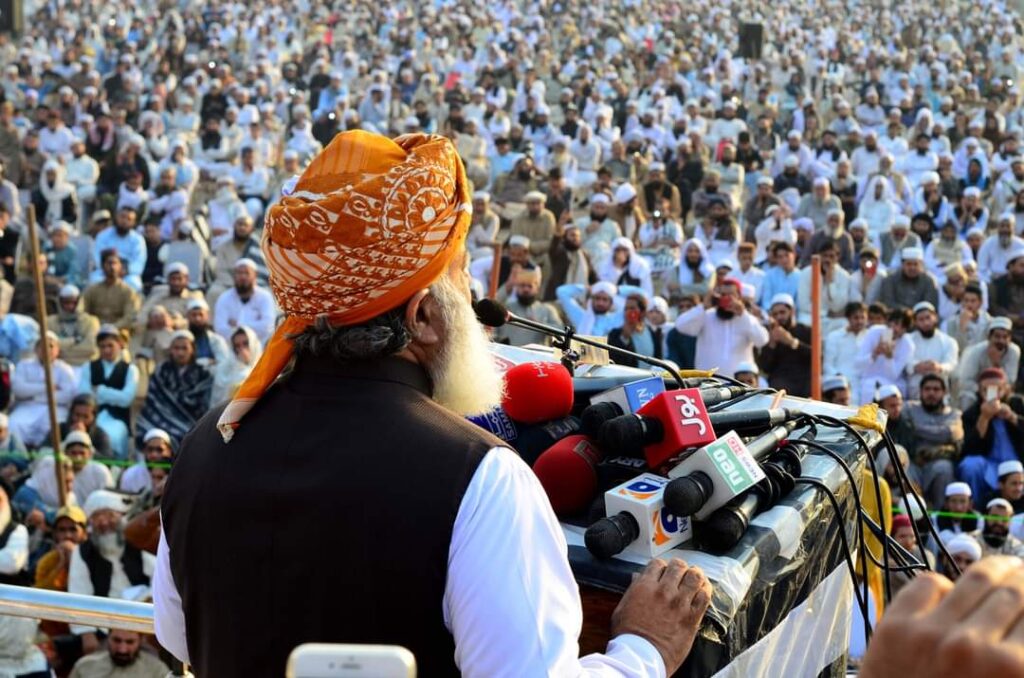 During his address, PDM President and Jamiat Ulema-e-Islam-Fazl (JUI-F) chief Maulana Fazlur Rehman announced that the 11-party alliance would stage a sit-in in front of the Election Commission of Pakistan (ECP) headquarters in Islamabad in protest of the delays in the Pakistan Tehreek-e-Insaf (PTI) foreign funding case.

He further claimed that the reason behind the delays was because the “largest chunk of money” for the incumbent government came from Israel. The PDM head said that the alliance will continue to use it legal and constitutional right until the present government is removed from power.

Fazl stressed that this country was a democracy and that without the “people’s consent”, they would not accept “anyone’s rule”.

“You cannot govern by stealing people’s vote. True representatives of the people are part of PDM,” he said.

The PDM president dismissed the rumours regarding the breaking up of the alliance, stating that while members of different parties have their own points of view, there was no disagreement over the core issues.

He boasted that the incumbent government was “mourning” after the PDM did not break up, and instead “spoke with one voice”. He said it was as if “someone had died in the government’s camp”.

He said that the PDM was struggling to bring true democracy to the country, and it would show its cards when the time was right. Fazl taunted that the government would be left “wondering”.

The JUI-F chief, taunting PM Imran, asked why the only change the country had seen was to the numerous cabinet reshuffle. Referring to the premier’s recent comments regarding learning how to lead after two years, Fazl said that Imran should have learned before he took the position.

“These people do not deserve to rule,” he stressed.

He echoed Maryam’s point of view and criticised the government’s handling of the economy. Fazl pointed out that, during Nawaz’s tenure, the growth rate had been 5.5. per cent and had been projected to rise up to 6 per cent.

He pointed out that now, people resorted to suicide and infanticide due to inflation.

Referring to the PTI as the “traders of Kashmir”, he accused them of having delayed the China-Pakistan Economic Corridor (CPEC) projects and of having pushed the economy into the negative.

He further said that the “selected” premier had prayed for Modi’s success, and now India had revoked Article 370 and changed the status of Kashmir.

He said that Iran had fallen in India’s camp and that Afghanistan did not wish to speak to PM Imran. Fazl maintained that all the countries in the region had progressed except for Pakistan.

Taking the stage, former PM and PPP leader Yousaf Raza Gilani said that he understood the plight of the people in poverty, and added that this region needed more than just “cosmetic measures”.

Gilani said that the solution to their problems was “the creation of a separate province”. He said that the ruling party had talked about establishing a secretariat in either Bahawalpur or Multan, but rejected the notion.

“We have asked for the province, not the secretariat.”

He added that ministers from the PTI would claim that this rally has failed as well, but he could see the masses which had gathered to oust the ruling party.

Furthermore, the PPP leader nearly all of the Charter of Democracy (CoD) signed between former premiers Benazir and Nawaz had been fulfilled.

Speaking on the occasion, Awami National Party (ANP) leader Mian Iftikhar asked why the government censors the leaders of the PDM if “we cannot do you any harm”.

“Your days are numbered,” he said to the charged crowded, emphasising that the opposition coalition would emerge as the victors.

It is pertinent here to mention here that Minister for Human Rights Shireen Mazari shared a video on popular micro-blogging site, Twitter, where she accused the JUI-F of bringing students from madrassahs to fill the crowds.

Shameful exploitation of madrassah students by JUIF for Bwp PDM jalsa! And not even providing them basic protection of masks. No value for the life of ordinary citizens. Clearly PDM has run out of supporters for their jalsas! pic.twitter.com/xv4CKWavao

Similarly, the official PTI Twitter handle commented on the speeches and accused Maryam and Fazl of running a “circus”. “After the resignation U turn, they are facing rejection everywhere,” the party’s account said.

The rally began Bahawalpur Toll Plaza on Sutlej Bridge, and then moved to Member of Parliamentary Assembly (MPA) Malik Zaheer’s lawn, wherein the party supporters stood on top of containers. Maryam asked the crowd to follow her towards Seraiki Chowk in the form of a procession.

Along the way, the PML-N VP shared a video of the procession with the caption: “Bahalwapur erupts”.

It is worth mentioning here that the rally was disallowed by the district authorities, who removed all banners and flexes advertising the jalsa, said a police spokesperson.

Furthermore, cases have been registered in Hasilpur and Ahmedpur East tehsils against dozens of opposition parties’ workers and officials for violating coronavirus standard operating procedures (SOPs).

Over the past few weeks, the poor performance of the Lahore rally, combined with the purported internal conflict in the anti-government alliance over the matter of resignations from the National and provincial assemblies, have led various leaders of the PTI to declare that the PDM alliance is dissolving.

On December 29, Minister for Information and Broadcasting Senator Shibli Faraz, while addressing a press conference, had pointed out that the Sharif family used to raise slogans of ‘Jaag Punjabi Jag’ in Punjab, and yet in Sindh, they loved to sit with PPP remembering Benazir.

Most recently, there had been rumours that the PPP would pull out of the plan to resign from the assemblies after a meeting of its Central Executive Committee (CEC), which had been held on last Tuesday.

However, PPP Chairman Bilawal Bhutto-Zardari, in a press conference after the CEC meeting, had stated that the CEC believed “that if we (joint opposition) take up the challenge of Senate elections collectively we can make a better impact and achieve larger success”.

He had added that all decisions made regarding the PDM would be a result of consensus and that nothing final has been announced regarding the resignations.