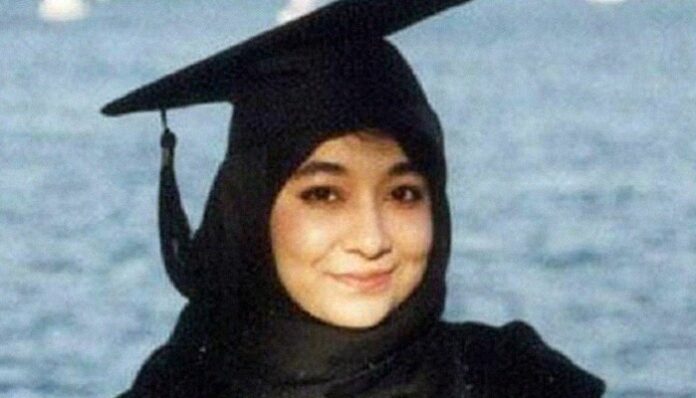 ISLAMABAD: The Islamabad High Court (IHC) was informed on Monday that Dr Aafia Siddiqui refused to meet Pakistan’s consul general in Houston who visited the prison where she is completing her jail term to seek her consent for filing a mercy petition before the United States Department of Justice (DoJ).

Siddiqui, 48, a neuroscientist, was handed 86 years in prison by a US judge in 2010 after she was convicted of “shooting” at Federal Bureau of Investigation (FBI) agents and soldiers after her claimed arrest in Afghanistan.

Islamabad has since been trying to repatriate the scientist but achieved little success.

During the hearing in a petition seeking information about measures taken for her release, the Ministry of Foreign Affairs submitted a report in the court of Justice Aamer Farooq, stating that consular visits in Federal Medical Centre (FMC) Carswell — a prison in Texas for female inmates of all security levels — had been suspended by the prison authorities over Covid-19 threats.

As a result, it said, all the scheduled meetings including that of the consul general with Siddiqui had been put on hold.

However, the report added, the diplomat remained in touch with the prison authorities in order to get updates on the health and well-being of the scientist, which were regularly shared with her family.

Due to efforts of the Pakistan embassy in Washington DC, a special consular visit was arranged in Houston to meet the inmate on September 4, 2020, it said.

Subsequently, on December 28, the ministry’s additional secretary (Americas) held a telephonic conversation with Siddiqui’s sister, Dr Fouzia Siddiqui, during which the former briefed the latter about the last consular visit and the latest status of the mercy petition.

Following the signing of the petition by Siddiqui during the December 2019 consular visit, the embassy had approached the DoJ for further course of action, the report said, adding the Office of the Pardon Attorney, DoJ advised the mission that a signed petition could only be filed by the inmate themself by post, through the jail warden or through her appointed attorney.

In the absence of a counsel, the only other option was that the inmate files the petition herself through the prison warden.

“To address this caveat, our Consul General in Houston planned a visit to FMC to meet Dr. Aafia Siddiqui. The meeting was scheduled on March 27, 2020, which was cancelled due to [the] Covid-19 pandemic. As an alternative, the petition was sent to FMC so that it could be forwarded to DoJ, however, FMC informed that Dr. Aafia refused to sign the additional consent form for dispatching the petition to DoJ,” it said.

“Consul general approached prison authorities for consular access at the earliest possibility. Only after the intervention of our Embassy in Washington, a special consular visit was arranged for Consul General on 24th September 2020, however, [the] consent form couldn’t be signed during that meeting.”

“Consul General again went to meet Dr. Aafia on 15th December 2020 but prison authorities informed him that Dr. Aafia Siddiqui had refused to meet him,” the report said.