PM calls for robust economic partnership between Pakistan and Turkey 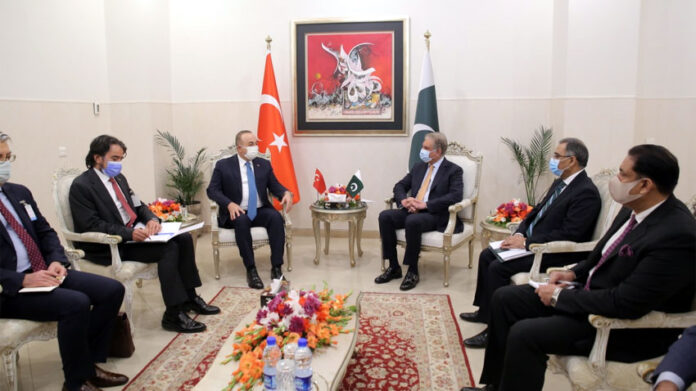 ISLAMABAD: Reaffirming the exceptional nature of Pakistan-Turkey political relationship, Prime Minister Imran Khan has stressed the importance of transforming it into a robust economic partnership.

The prime minister was talking to Turkish Foreign Minister Mevlut Cavusoglu, who called on him on Wednesday.

During the meeting, Pakistan-Turkey bilateral relations and regional and international issues were discussed. The shared resolve on both sides to further upgrade trade, investment, defence, educational and cultural cooperation was reaffirmed.

He emphasised the importance of working to combat Islamophobia and promote better understanding of the reverence Muslims have for Holy Prophet (Peace Be Upon Him).

The prime minister thanked Turkey for its steadfast support on the Jammu & Kashmir dispute and highlighted the detrimental Indian actions posing a threat to peace and security. In the regional context, he underscored the importance Pakistan attached to a peaceful solution of the conflict in Afghanistan. In this regard, he highlighted Pakistan’s positive contribution to the Afghan peace process and the imperative for all Afghan stakeholders to work for bringing down violence leading to ceasefire and securing an inclusive and broad-based political settlement.

It was agreed to maintain high-level exchanges and further build Pakistan-Turkey strategic relationship to the mutual benefit of the two countries and peoples.

Earlier, Foreign Minister Shah Mahmood Qureshi met with his Turkish Foreign Minister Mevlut Cavusoglu in Islamabad and the two discussed the rise of Islamophobia, a statement from the Foreign Office (FO) said.

They stressed for joint efforts to protect the Islamic values. FM Qureshi also apprised his Turkish counterpart about the prevailing situation in Indian Occupied Kashmir (IOK). He thanked Turkey for its unwavering support to Pakistan on Kashmir dispute.

On the occasion, Cavusoglu remarked that Pakistan is like a second home for the people of Turkey.

They also spoke about matters of mutual interests in order to further strengthen the bilateral relations between the two countries.

Qureshi and his Turkish counterpart agreed upon the need for a prompt implementation of the Pakistan-Turkey Strategic Economic Framework (PTEF), the statement read.

The two discussed means to promote bilateral trade through efforts such as how Pakistan had launched an e-visa facility for Turkish businessmen.

Turkish FM Cavusoglu arrived in Islamabad last night on a three-day visit. This is Cavusoglo’s third visit since August 2018 when the government of PM Imran assumed power.

“Fraternal relations between Pakistan and Turkey are deeply embedded in common faith, culture and history and underpinned by exceptional mutual trust and respect,” the FO statement had said.

“Pakistan-Turkey bilateral relations have been institutionalized under the High Level Strategic Cooperation Council (HLSCC), which is the highest level decision-making forum, providing strategic direction to further boost the partnership.”